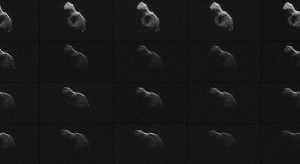 NASA scientists using Earth-based radar have produced sharp views of a recently discovered asteroid as it slid silently past our planet. Captured on June 8, 2014, the new views of the object designated “2014 HQ124” are some of the most detailed radar images of a near-Earth asteroid ever obtained.

An animation of the rotating asteroid and a collage of the images can be seen at youtu.be/6r7ncRra1hI

According to Benner, 2014 HQ124 appears to be an elongated, irregular object that measures at least 1,200 feet on its long axis. “This may be a double object, or ‘contact binary,’ consisting of two objects that form a single asteroid with a lobed shape,” he said. The images reveal a wealth of other features, including a puzzling pointy hill near the object’s middle, on top as seen in the images.

The 21 radar images were taken over a span of four-and-a-half hours. During that interval, the asteroid rotated a few degrees per frame, suggesting its rotation period is slightly less than 24 hours.

Each image in the collage and movie represents 10 minutes of data.

The new views show features as small as about 12 feet wide. This is the highest resolution currently possible using scientific radar antennas to produce images. Such sharp views for this asteroid were made possible by linking together two giant radio telescopes to enhance their capabilities.

To obtain the new views, researchers paired the 230-foot Deep Space Network antenna at Goldstone, California, with two other radio telescopes, one at a time. Using this technique, the Goldstone antenna beams a radar signal at an asteroid and the other antenna receives the reflections. The technique dramatically improves the amount of detail that can be seen in radar images.

A recent equipment upgrade at Arecibo enabled the two facilities to work in tandem to obtain images with this fine level of detail for the first time.

“By itself, the Goldstone antenna can obtain images that show features as small as the width of a traffic lane on the highway,” said Benner. “With Arecibo now able to receive our highest-resolution Goldstone signals, we can create a single system that improves the overall quality of the images.”

The first five images in the new sequence—the top row in the collage—represent the data collected by Arecibo, and are 30 times brighter than what Goldstone can produce observing on its own.

For asteroids, as well as comets, radar is a powerful tool for studying the objects’ size, shape, rotation, surface features and orbits.