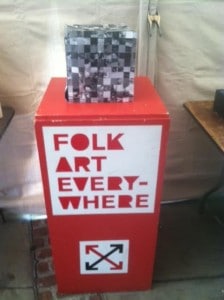 How do you finish a year at AVPA Visual Arts covering the spectrum? How about a professional presentation by the students, a mural completed on campus featuring student artists as the models and an homage to a TED prize?

Sunday, June 1 was the moment for the students to present (Title Here, not there, but here) at the Craft and Folk Art Museum on Wilshire Boulevard, turning the courtyard into a party and filling a tent with installations and artwork.  A whimsical collection of art projects focused on film filled the tent that the students had created to house the show. Billed as a “Starving Young Artists Motion Picture,”  the exhibit was directed by Vincent Ramos and produced by Fabrizio Flores (and of course, Kristine Hatanaka, the energetic mentor to the Visual Arts program)  beautifully accompanied by the always-welcome AVPA jazz band. 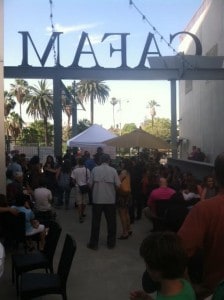 tent, posing the question ‘what makes a script’ by subverting text into symbols and leaving the pages and brass studs in place as a template. The back of the tent held another table with a semicircle of video monitors, each holding a seemingly static head-shot style portrait of the artists; careful observation showed that there was occasional motion- the turn of a head, the blink of an eye – cleverly playing with the ‘Harry Potter’ idea of magic photographs that move.

Tuesday, June 3 visiting muralist Fintan Magee put the finishing brush strokes on his mural on the campus of CCHS, a striking orange and brown scene of floating stones and facing figures. The art students got to be models for the figures in the mural, and Alex Cerutti and Amy Wong had a chance to be the subjects in another artist’s work rather than creating their own. 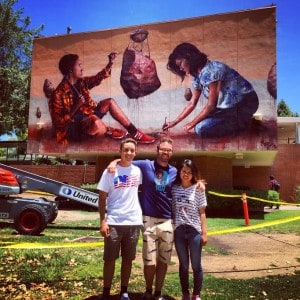 Magee, who also created the mural at Sepulveda and Lindblade, was delighted to have the students as part of the work. “Alex and Amy were great, ” he said “It’s good to be on the flip side once in a while.”

Directly across the hall from the new Magee mural is a project by Mireya Vasquez, using multiple photos to show the diversity of the students. Inspired by the work of guerilla photographer JR (See culvercitycrossroads.com/2011/03/04/got-ted-get-in-on-it-now-and-get-some/) Vasquez has used portraits of students to reflect on inspiration and common ground. 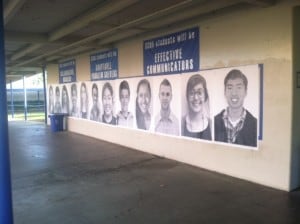 the world, there isn’t any question that they have left their mark on the campus with style and a complete and colorful spectrum.

Thanks to Dan O’Brien for photo #3