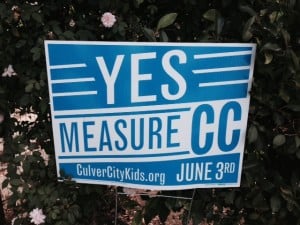 When the early returns came online at the “Measure CC Victory Party” a loud cheer went up from the house. The mail-in  ballots showed a 76% margin of YES, giving the school bond ample approval, even before any districts were reporting in.

School Board member Kathy Paspalis offered her thanks to all who had worked so hard to get the bond passed.

“All the organizations that had a hand in helping this pass; United Parents of Culver City, the Chamber of Commerce, were just tremendous in their support,” Paspalis offered “and everyone here who made phone calls, who walked neighborhoods, who made signs, we could not have done it without you.”

Two volunteers who had put in relentless effort, Jamie Wallace and Leslie Gardner, were both applauded by the room and presented with gift certificates as a thank you for their efforts.

School Superintendent Dave LaRose noted “We have this phrase that we like to use – ‘Success for all…’ ” and the room finished it for him “Takes us all!”