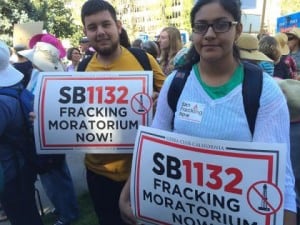 Success in Sacramento this morning! As hundreds of California citizens waited for a chance to speak, California State Senate Bill 1132, calling for a moratorium on fracking, successfully moved into ‘suspense’ and will be considered by the Appropriations Committee for vote before the full Senate after deliberations conclude Friday.

National attention has focused on the bill , authored by Senators Holly Mitchell and Mark Leno, due to the impact California’s worsening drought and ensuing wildfires could have on the decision by California lawmakers.

In a New York Times May 14th article California’s Thirst Shapes Debate Over Fracking, reporter Norimitsu Onishi notes that California is the only state where the exorbitant amount of water employed in fracking is a primary driver in the push for an immediate ban. Onishi cites a Western States Petroleum Association study conducted last year which revealed that the amount of water to frack one well equaled 87% of the water used over a one year period by a family of four.

As state officials consider more extensive use of fire retardants to conserve water in the battle against the early onset of a fierce firestorm season, the concept of using 5 million gallons of water to frack one California well borders on insanity. (see Energy Facts: Energy Facts: How Much Water Does Fracking for Shale Gas Consume? and data from FrackFocus)

The National Drought Monitor last week revealed that 100% of the State is experiencing extreme drought conditions, with some parts reaching rare ‘exceptional’ status.

The passage of SB 1132 would make California the third state to issue a temporary ban on fracking – along with acid well stimulation – until more environmental studies are conducted.

The other two states with temporary bans in place are New York and North Carolina. Vermont is currently the only state to permanently ban fracking. In Colorado, where legislation failed, a ballot initiative is now being written to place limits on fracking.

The Times article noted that “the drought, combined with a recent set of powerful earthquakes, has provided the momentum for about a dozen local governments across California, the third-largest oil producing state, to vote to restrict or prohibit fracking in their jurisdictions, as concerns over environmental effects and water usage have grown.” (See also (See also an LA Times Editorial Does fracking cause quakes? California needs to know )

These actions include a permanent ban in Beverly Hills; a pending Los Angeles ordinance; a 45-day ban in Carson; and restrictions in Culver City and Santa Cruz and Santa Barbara counties.

The committee will announce Friday if SB 1132 moves through Appropriations for a vote by the entire Senate. That vote would occur within a few days. (see The Sierra Club information page on the moratorium for complete information.)