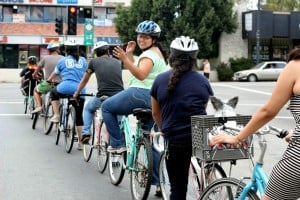 While waiting for bills to pass through the legislature may be as exciting as watching grass grow, it’s important to be aware of how Sacramento is affecting Culver City. Local issues like bike transportation and fracking are on the table, so getting in touch with Rep. Holly Mitchell and letting her know how you feel can turn up the heat on things you care about, like…
SB 1183 (Vehicle Registration Fee for Bicycle Infrastructure), originally proposed as a sales tax on new bicycle purchases, has been changed to a proposed motor vehicle registration surcharge (not to exceed $5). Revenues would go to improving bicycle infrastructure on both existing and new recreational trails, and include maintenance purposes.

If passed, SB 1183 would not automatically impose any fees. Cities, counties and/or regional park districts would be allowed to propose fees for the ballot and seek approval from two-thirds of local jurisdiction voters. The East Bay Regional Park District, one of the bill’s sponsors, recognized the change as an effort to avoid a point of sale tax that may discourage bike riding. SB 1183 would provide a steady funding source to operate and maintain trails.

The bill was passed out of the Senate Transportation Committee on a 6-4 vote and is currently on the Appropriations Committee suspense file.
AB 2398 (Vulnerable User Road Law) currently proposed in the California State Assembly would raise fines for drivers convicted of causing bodily injury to a vulnerable road user, such as a pedestrian or bicyclist. If you were walking across the street today and happened to be hit by a car that driver could be fined up to $95 (or as little as $70). If passed, AB 2398 would increase the fine to a minimum of $220 and a maximum of $1,000 for “great bodily injury.” The bill would also require the convicted driver to have their license suspended for six months if the crime was repeated within three years.

The bill was passed through the Assembly Transportation Committee on a 13-0 vote and is currently in the Appropriations Committee under suspense file.
SB 1132 (Well Stimulation) would halt well stimulation treatments like hydraulic fracturing and acidization until a legislatively required study on the safety of the practice is completed and the Governor confirms well stimulation treatments can occur without harming the public’s health. SB 1132 has passed through the Natural Resources and the Environmental Quality Committees. It goes before the Senate Appropriations Committee next. The California Legislature has debated, but failed to pass, well stimulation moratoriums before. Community Health Councils is among the bill’s supporters.
SB 1005 (Health For All) extends the Medi-Cal expansion and create a “mirror exchange” for all income eligible Californians regardless of immigration status. The bill passed the Committee on Health 6 to 1 and will be heard in the Appropriations Committee May 19.