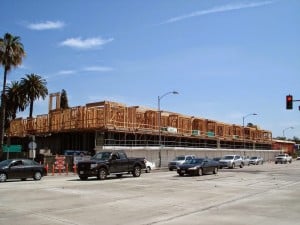 Construction’s now half-finished on Culver City’s mixed-use Oliver apartment complex at Marcasel and Washington, according to Curbed, and it’s an area that has yet to be gentrified like other sections of the city. Reports Building LA: the four-story Oliver will have 30 residential units and 8,700 square feet of ground-floor retail space; as for aesthetics, there will be large groundfloor windows and wood panel exterior accents. There aren’t too many mixed-use projects in these parts, but Bastion Development Corp., the Vancouver-based developer behind the Oliver, likes to be the first in an emerging area. They’d previously purchased two other Culver City parcels on Washington: one by the local Costco (the Landmark19) and one by Inglewood Boulevard, where they plan 100 units.