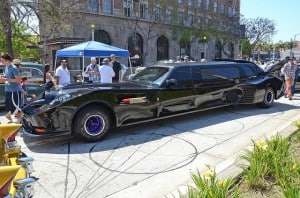 The 1950’s and early 60’s were a simpler time in America. Most of the cars on the road were built in Detroit and a lot of the early rock and roll was coming from musicians from the South who sought a decent day’s pay up north in the automobile factories. Berry Gordy, founder of the famed Motown Records, was one of those workers, who briefly toiled away on Ford Motor Co.’s assembly line before launching his game-changing record label from a small house on West Grand Boulevard in the heart of the Motor City.

Gordy took that experience on the line and applied that method to record production. “At the plant, cars started out as just a frame, pulled along on conveyor belts until they emerged at the end of the line – brand-spanking-new cars rolling off the line. I wanted the same concept for my company, only with artists and songs and records,” wrote Gordy in his autobiography, “To Be Loved.

In 1959, with just an $800 dollar loan from his family, Gordy founded his fledgling record label at around the same time General Motors were pumping out mile-long Cadillacs with tailfins that resembled a WWII era P-38 Lightning aircraft.

Music and the American automobile have gone hand-in-hand for as long as cars started arriving on the scene. Songs like “409,” by the Beach Boys, Asleep at the Wheel’s “Hot Rod Lincoln,” or Rocket 88 by Jackie Brenston are songs that are indelibly connected to American car culture.

Both music and classic American automobiles will be on display on Saturday, May 10th, as the Eleventh Annual Cruisin’ Back to Culver Culver City Car Show makes its way back to the downtown square.

More than 400 classic cars and hot rods will be on display from 9 a.m. to 3 p.m. in downtown Culver City, with live music, food and drinks from all of the surrounding restaurants and taverns. George Barris, Hollywood car customizer extraordinaire will also be on hand, showing off his classic cars and designs from the 1960’s and 70’s.

Big Sandy & His Fly-Rite Boys who made their mark in the So Cal rockabilly revival scene in the early 90’s will be of the bands performing during the show. Their blending of western swing and country boogie style are always a welcome sound in an outdoor setting. More info on the event can be found at www.culvercitycarshow.com/.

If classic American muscle cars aren’t your thing, but still enjoy beautiful cars and design, you can head down to the Concours d’Elegance event in Beverly Hills on Sunday, May 4th. Derived from the French meaning of competition of elegance, these multi-faceted events celebrate the restoration of vehicles from another era that surpass “mint” condition in terms of how meticulously the cars are restored.

What better place to celebrate this kind of design and opulence of classic automobile design than the historic Greystone Park & Mansion in Beverly Hills. While at the Greystone, you can view World Class Vintage Automobiles and Motorcyles, with access to the stunning mansion and grounds, built in 1928 for oil tycoon Edward L. Doheny. Also on tap will be gourmet food, beverages and a marketplace of automobilia, books, fine art, jewelry, fashion and antiques.

Tickets must be bought before the day of the event and more information on tickets and parking can be found at www.greystoneconcours.com.

So whether you like ’64 Impalas with a “409,” or a classic 1959 Porsche Spyder, you have an amazing opportunity to see both up close and personal in Culver City and Beverly Hills. Two historic Southern California cities that have ties to automobiles and Hollywood. Enjoy!