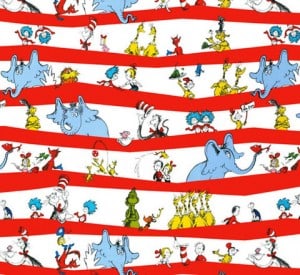 A twelve-year old up until 3AM? Must be up playing video games, right? Not in this case. Twelve-year-old Isa Berliner has been working round-the-clock on last minute details, from staging, to programs, to learning lines to stand-in for cast members for the upcoming production of “Seussical the Musical,” showing at Robert Frost Auditorium this weekend: Saturday at 3pm and 8pm, and Sunday at 7pm. Tickets will be available at the door for $10 per person, for ages 4 and over. Under 4 are free.

But, fair residents of Culver City, you must understand: this is NOT your typical middle school production! It is produced, directed, cast, acted, set designed, costumed, fund-raised…phew, did I say that every aspect of this production is done by kids, aged 11-14? Even the band, lighting and sound is a high school crew, graduates of this program while at Culver City Middle School.

Isa leads 80 plus students from all grades, who have been working collaboratively all year to put on this show.
At the beginning of the school year last September, our entire student body of 1,500 Culver City Middle School students were invited to sign up for various programs within the school day. They could choose from Recycling, Campus Beautification, Video production, Anime-Manga Appreciation, Student Court or Debate Club, just to name a few. I’m not a math teacher, but, when I tell you that 180 students signed up for “Performances,” I tell you that more than 10% of the school wanted to get into the act!

Auditions were held for three weeks during the 30 minute periods, four times a week. Isa obtained permission to use one of our school gyms. Tears welled in my eyes when I saw students from all walks of school life, of all ages, grades, sizes and shapes, try out by dancing and singing to routines Isa had prepared.

In the end, about 60 of the students not chosen signed up for other programs, and we were left with three classes worth of students (about 120 of them) supervised, eventually, by three teachers. One of us took cast, one took crew, and I took a group we called, in “Seussical” terminology, “The Thinks.”

I asked who wanted to be in a dance troupe, and about 15 students stepped forward. We have been forming our routines, have our “bling” T-shirts lined up, and will perform briefly at lunch Friday, pass out Seussical flyers, and then keep performing on Friday lunches, if all goes well, until we can sell tickets to our own shows.

The other half of the group transformed into a “Sales and Marketing” crew, who have been making posters for the show, and walking classroom to classroom to spread the word and sell show tickets. Students working directly or indirectly on “Performances and Productions” now number close to 200.
This is the third year we’ve been “in business.”

In May of 2012, a group of about forty Culver City Middle School students produced, directed, wrote, staged, costumed, acted in, raised money for, and sold tickets to a play called CATCHING BUTTERFLIES. When that school year started, in September of 2011, such a thing was beyond imagination.

Students in Culver City have been fortunate to be able to participate in several extracurricular classes, including Improv, which is delivered by an outside organization, and some other off campus theatre arts concerns that cater to youth, such as The Actor’s Gang or Dee-lightful Productions. Culver City High School has its renowned AVPA Program, and, district-wide, we have been working closely with The Music Center on K-12 arts integration programs for many years. Before my time, I heard there had been a Drama elective, but budget cuts throughout the years reassigned the teacher; old props and costumes languish in storage.

In usual cases, there is an adult “teaching” the students how to sing, dance or emote their voice. Such teachers have years of expertise, some of them actors or choreographers themselves. The thing with these students is that, at the ages of 11-14, they already have acquired so much experience in theater, musical theatre specifically, that they often have mastered some of the arts already. This can relate to the classroom. Lots of times, we might find ourselves up teaching How to read, for example, when some of our students are already reading beyond grade level. This program is born out of the question, “what do we do for the students who have mastered the material?”

In the spring of 2011, I attended “Darn Yankees,” in CCUSD’s Robert Frost Auditorium. I saw lots of students from the “G.A.T.E” (gifted and talented education) Program that I am in charge of on the stage. To the time, and like most people, I associated giftedness with prowess in Math or Reading skills, or I’d see high level critical thinking skills on display in the Chess and Games Club I also manage for the school. I understood at that moment that giftedness, and talent, is actually much, much more.

When the school year started, it turned out that the teacher of the after school program that had put on the Broadway productions was gone. I went to a few of the talented students who had been in the Yankees play and said to them, “why don’t you put on a play yourselves?” They told me I was crazy!

That was the same school year, however, that CCMS had changed the bell schedule to expand our twenty-minute “silent sustained reading” session to thirty minutes, nipping and tucking an extra ten minutes from other parts of the schedule. They originally did this with the purpose of remediation for students who were not successful on the state tests. These days, we call it “intervention,” the answer to so-called “Question 3” of Richard DuFour’s Four Essential Questions:

1) what do we expect students to learn?
2) how do know if they learned it?
3) how do we respond when they don’t learn?
4) what do we do when they already know it?

By way of answering “Question 4,” I received approval to start an enrichment program during the same time slot. I cobbled together a team of like-minded and flexible teachers to supervise the reorganized groups of students. We started by surveying students about what they’d like to do during the time slot. Crazy me listed “Performances” on the questionnaire.

A classroom full of kids signed up for “Performances.” The colleague who was to lead them ended up going on maternity leave, and that’s how I got sucked into being directly involved with the “Performances” group myself; I know nothing about theatre at all, and, as I told some colleagues the other day, I am still on a slow learning curve.

But now I love it, because it is life-affirming seeing the students do this. It is the essence of learning, of this thing we call education. It is the lifeblood of life, the real thing.

That first year, after schmoozing for several class periods, certain students emerged as leaders; writers, producers, and the like came forward. The three performances were a resounding success, and made $1000, which the kids decided to donate to charity; they never believed (note the pattern of disbelief) that we would go for it again the next school year. The kids were tired, they didn’t even want to talk about the future; couldn’t see clear to next September.

They told me they weren’t doing a show the following year. Yeah, right. I wrote “Performances” on the form again, and, again, they came. Year Two, I was asked to get (and received) $1000 (wishing we had the proceeds from the prior year) from the PTSA as a deposit on the rights to a Broadway show, ONCE ON THIS ISLAND. We made enough money from the show to pay our expenses, and have something let over to start again with Seussical this year.

It was interesting to hear that the new Common Core testing includes so-called “performance tasks” for students to do, as opposed to the heretofore multiple choice tests. Interestingly enough, the 6th grade Math task for this (practice) year is said to be related to “putting on a talent show.” What? Is that math?

The question is: what in musical theatre does NOT touch every subject taught in middle school? The language arts and social studies connections are obvious, math is also pretty clear, from the set designs to the economics of the show. But science even comes into play: cast members were admonished not to eat dairy products after Wednesday before the show. Dairy causes phlegm, and phlegm is not good for singing. There is the “physical education” of dancing, there is the memorization also needed for foreign language study, and it goes on. A show like this is indeed a microcosm of school, of life.

And, as we know from living here in Screenland, entertainment is big business. No bake sales for us here at CCMS.

Please support us with your attendance at one of our shows this weekend.

Seuss has arrived, he’s come to our city,
If you’re not able to join us, it’d just be a pity.
For the time of your life, ten dollars a seat,
Take a moment to witness our amazing feat.