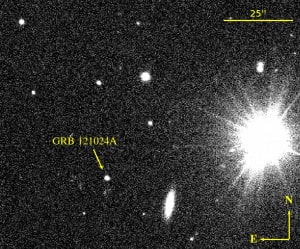 For the first time an international team of astronomers has measured circular polarization in the bright flash of light from a dying star collapsing to a black hole, giving insight into an event that happened almost 11 billion years ago.

Dr. Peter Curran from the Curtin University node of the International Centre for Radio Astronomy Research (ICRAR) was part of the team that observed gamma-ray burst 121024A—a bright flash of light emitted by a dying star collapsing to a black hole—and found a surprising detail in the light they collected.

The research was published May 1 in the journal Nature.

“Gamma-ray bursts are so powerful that we can see them clearly at extraordinary distances,” Dr. Curran said.

“But this one was an unusual case, its light had a strange feature—it was circularly polarized.”

If light is polarized it means the waves are moving in a uniform way as they travel—either bouncing up and down or left and right for linear polarization, or in the case of circular polarization, corkscrewing around in a spiral motion.

Dr. Curran said 3D movies make use of circular polarization by feeding a different image to each eye through special glasses, giving the illusion of depth while watching a film.

“Most light in the natural world is unpolarized, the waves are bouncing around at random,” he said. “But the light from this gamma-ray burst looked like it was part of a 3D movie—it was about 1,000 times more polarized than we expected.

“This means that the assumptions we’ve been making about gamma-ray bursts need to be completely reconsidered—assumptions of how electrons are accelerated to the incredible speeds we observe.

“Our results show that gamma-ray bursts are far more complex than we thought,” he added.

Gamma-ray bursts are the brightest objects in the entire universe, only lasting a fraction of a second, but sending out as much energy in that time as the Sun will in its entire life. These bursts are emitted by dying stars collapsing to black holes that form jets of material traveling at over 99.995 percent of the speed of light.

“These extreme objects are like super-powered versions of the world’s largest and most powerful particle accelerator, the Large Hadron Collider, except very far away in space,” Dr. Curran said.

“We can use them to study microscopic electrons and how they behave in extreme environments, at a great distance—in this case, 18,500 million light-years away, at a time when the universe was just a fraction of its current age.

“This is the first time we’ve found circular polarization in the light from a gamma-ray burst, but we think we’ll find it in more bursts in the future, so we can start to pin down what’s actually happening when these bright flashes of energy are released.”

ICRAR is a joint venture between Curtin University and The University of Western Australia.