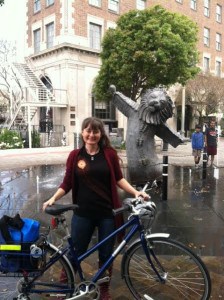 “Of course, it’s more than a bit ironic, since I got into politics because I was unhappy with how a particular development was being handled. Now I’m going to be mayor while we get these big development deals up and running; the market hall, Parcel B…the city is going to be changed by all this.”

While it isn’t journalistically proper, every once in a great while it’s okay to visit the land of foregone conclusions. I found it sitting across the table from Meghan Sahli-Wells, inquiring about her thoughts on becoming mayor.

“It’s largely a symbolic office. The mayor doesn’t have any kind of political power that’s above the rest of the council. Still, being the symbol of the city for all the ribbon cuttings and events, it’s a pretty cool thing to do. It’s an honor to be the face of Culver City.”

When I asked about what sustained her interested in politics, she said’ “It’s a bit weird to admit it, but I really love being in all these meetings. It’s just great to listen to what everyone has to say, to talk about what are solutions can be. Of course, my angle is always about the environment, I don’t want to overstate how important it is, but it’s primary to how everything else can and does work.”

We talked about the dearth of women in local politics, noting that she will be only the fifth woman to be mayor in almost a hundred years of city history. Why don’t more local women run for office?

“We seem to feel that it’s a lot to bite off, and believe me, city council is a busy place to be. The common wisdom sees it as being different from the school board – Look at the numbers there. We had a majority of women and a minority of men on the last two boards. Council is the inverse of that. But I don’t think council is really that much more work, it’s just farther away from the tradition sphere of interest. We expect moms to get involved with education, we don’t expect them to get involved with urban planning.”

Looking forward to tonight’s rotation, the Vice Mayor is starting off with a new bicycle, a green attitude towards development, and a great supporting role in local history.