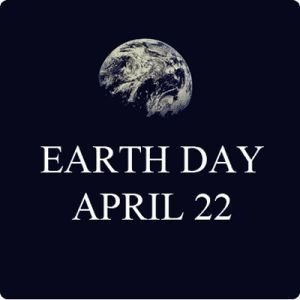 I’m Laura Matthews. Some of you may know me as a climate activist with Citizens’ Climate Lobby, the group I went to Washington with to lobby for a carbon tax. Others might know me more from my spiritual journey, that of striving to practice the teachings of Jesus. I’m honored to be here today to talk about them both.
And I’m here to pose a question: How are Earth Day and Easter related?
Easter, as one of the central celebrations of Christian teachings, and Earth Day, on Tuesday, a celebration of the planet we all share and need to care for—what do these have in common?
To my view, they share similar themes. They both celebrate life and they both encourage us to think of others.
This earth teems with life. In the five mass extinctions over hundreds of millions of years, many species were lost to us forever. But life as a whole bounced back, eventually evolving this last time to include us.
Yet now we face a possible mass extinction of our own doing due to climate change. The earth, as many have said before me, will be fine. It will adjust back to its normative temperature as it has done repeatedly, and life will again cover the planet as it always has.
But what will happen to us?
That is the question. We may be facing radical changes to our way of life, where we can live, the foods that are available to us, even how long we can shower.
Beyond that, we will see upheaval as nations around the world struggle for survival. In many cases, as we’ve seen in the Sudan, Egypt, and Rwanda, fighting has started already, sparked by climate alterations that led to drought and rising food costs.
How can we ensure that this does not get out of hand, that we retain the best of ourselves while shedding the evils that have brought us to the brink?
This is where the meaning of Easter might bring some hope.
If you’re familiar with the Easter story you know that after being executed for activism against the regime at that time, the story says Jesus came back to life. It goes on to say that after this resurrection, Jesus appeared to his fishermen friends on the beach one morning. He fed them a breakfast of fish and charged them to likewise “feed [his] sheep,” or tend to those he had shown the most love, as he would himself.
The story of rebirth and the call to be a shepherd, whether you believe it literally happened or not, has meaning for us today as we strive to discern how we should care for those most impacted by the changing environment, but who are the least to blame.
Some of you might be aware of the recent report from the Intergovernmental Panel on Climate Change detailing how the degradation of the earth’s climate is already impacting all the nations of the world. The report concluded that the brunt of it will be felt most by those who had the least to do with causing it. Unfortunately, the nations most responsible for the damage resist helping poorer nations adapt and cope. And unfortunately, those poorer nations often turn to violence and upheaval to defend their children and their future.

This could be a story of slow or sudden death, of the human race crucifying itself by turning a blind eye or drowning itself in conflict over resources. But like the story of the earth, the story of humanity has always been one of rebirth and renewal. I believe the Easter story has seeds of this promise in it. “Feeding the sheep” is a metaphor that has meaning to me as I consider my obligation to those on the other side of world.

I remember meeting a young woman from Bulgaria on a trip to Greece several years ago. She wound up saving me from missing a connection and being stranded for several days. We subsequently had dinner together. She ate the humble meal she had in her bag. I ordered the seafood pasta, from which I proceeded to pick out the squid and the octopus. She watched me for a moment, then said, “Are you going to eat that?”
I said no, I didn’t like it. She bluntly said, “In Bulgaria, we would never waste good food like that. Can I eat it?” Taken aback, I said, “Sure,” and got her another fork. She happily devoured all my leftovers.
This blew me away. I really had to analyze it to figure out what had happened. My initial inner protest was, “Well, I paid for it, I don’t have to eat it.” Immediately following that was the realization that this is probably a uniquely American attitude. “If I can pay for it, I’m entitled to waste it.” I discovered to my chagrin that this was a value I had completely absorbed. I felt it was my right to do whatever I please with whatever I had bought and paid for.
I started noticing how much that assumption colored my actions. I would buy too much produce and let it go bad. I would drive to a store two blocks away so I wouldn’t have to carry things home. I would leave lights on because I didn’t like to walk into dark rooms.
But isn’t the fresh produce about more than the kale or the oranges? It’s also the trucks bringing the produce to market, the water used to grow the plants, the labor that had harvested it. When I threw out that orange, I was wasting all of that. Was I really entitled to do that just because I’d paid the eighty-nine cents?
It was when I realized that somewhere, someone was burning a chunk of coal to get me those lights that the switches were finally changed to “off.”
That encounter with my Bulgarian friend changed me. I still take way more than my share compared to the rest of the world, because I’m still living in America. I can’t do much about that. But I also have something that Bulgarian girl doesn’t have. I have a voice in the most powerful political landscape in the world.
My voice, just by virtue of the fact that I was born and live here, can reach farther and do more than millions of voices in Bangladesh, in Sudan, in Bulgaria. This is the thing I should not waste. Since I am enjoying more than my share of what the earth has to offer, I also should speak up more than my share to balance that. If everyone on the earth had an equal voice, this would not be necessary. But, they don’t. I have to be active for the earth and my brothers and sisters in faraway lands who cannot speak for themselves.
A couple weeks ago I attended a forum for those running for retiring Henry Waxman’s seat in Congress. In the Q&A period, I got up and asked, “Waxman has been a giant fighting against climate change and for the environment. How do you plan to fill those very big shoes?”
One of those six will probably go to Washington in Waxman’s place. By asking the question, I let them know that I’d be holding them accountable. I let them know that I expect them to make this issue a priority. I let them know I’d be watching.
In this election year, each of us has multiple opportunities to speak up for our brothers and sisters across the globe—with our questions, with our being educated on the issues, with our vote. Even our one vote, here in the U.S., can do way more than we know.
Today, too, there are hundreds and thousands of earnest people—scientists, activists, even politicians—working to mitigate and adapt to the changing climate. They deserve our support for research and our educated influence on policy-making. I encourage everyone to think about what aspects of this challenge most move you, and take that energy and turn your passion into action. The more of us who speak up, the better.
When we talk about saving the earth, we are really talking about saving ourselves. The earth will be fine, with or without us. What each of us needs to decide is what aspects of humanity are worth allowing to continue.
Do we continue with rampant consumption and the waste that goes along with it?
Or do we become reborn as a civilization that values ideas over objects, relationships over possessions, giving over receiving?
Do we continue to claim, as Americans, “If I can pay for it, I am entitled to waste it”?
Or, even if it means we have to learn to consume less, do we become willing to share?
The rebirth and resurrection that humanity must undergo will change us from what we are today into what we need to be tomorrow. We must welcome that change. Wasteful practices must be left in the tomb, and seeing ourselves as part of a larger whole is due for resurrection. We can resurrect it first in our own hearts, and then look for ways to “feed the sheep.” In the process, we might just save ourselves.

Laura Matthews is a climate activist with www.CitizensClimateLobby.org. She’s also a writer and book editor for self-publishing authors of all genres, including spirituality. Her editing website is www.thinkStory.biz.

Editor’s Note – This was a talk delivered at the Santa Monica  Unitarian Universalist Church on Easter Sunday, April 20, 2014.