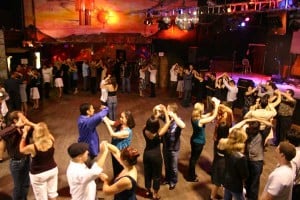 Culver City is home to one of the main venues that one can learn Rueda de Casino (also known as Cuban Salsa) dancing in Southern California. On every 2nd and 4th Sunday, from 1:30-3:30, you can see people circled up into pairs, under the gazebo in Media Park. Media Park is bordered by Venice to its north, Kay n Dave’s Mexican Restaurant to it’s immediate West, Culver City’s own Trader Joe’s to its South, and the Actor’s Gang Theatre is in the park, to the east of where we dance.

Certain weeks, I’ve wondered if I actually danced more hours than I worked. Yes, I am THAT into dancing. Having said that, I never liked salsa dancing much, because I found it too perfectionist oriented, and most if the ladies would dress too sexily to allow the average middle-aged woman to score a partner. Not to mention the heels the chicks wear; if I could wear them at all, I’d be liable to go over on an ankle, wrecking my other dance opportunities. So, despite, even private lessons I did even take for a while, bartered for Japanese lessons a few years ago, I’ve mostly stayed away.

That’s until I learned about this “Rueda de Casino” dancing. “Rueda” means “wheel” in Spanish, and that’s how you do the dance: as a group, in a wheel-like formation. You are in pairs of leads and follows (gender often not mattering), learning and following calls by the instructor or leader. In the Los Angeles area, and specifically Culver City, we learn to do this dancing in parks around town. For the usually two-hour session, we start we easier moves, and progress to harder ones. We get the immediate gratification of learning a move, practicing it in the circles few times, then the music is put on, and, voila, we’re dancing!

The music sounds like what most of us would call “salsa” music, but it is a specific type called, “timba” music, from Cuba. I’m just now learning to distinguish the difference from regular salsa music. As is the case with a lot of salsa dance venues, unlike swing or contra dancing, you are not as a rule dancing to live music, but rather, DJ’d music, although you can find opportunities and venues with live bands, too. The music, like the calls, are in Spanish, so this is a kind of fun way to learn a little Spanish while you’re at it.

The calls consist of Spanish language words, phrases, sometimes even names of dancers who have contributed certain moves over the years. You’ll have a move called, “sombrero,” for example, that is reminiscent of putting something over your head; you learn a term and a movement together, then you are “quizzed,” when the music plays. Your leader, or caller, yells “sombrero,” and you, eventually, know what to do. Leads have the responsibility of knowing the moves more resolutely than follows, although follows also have a job of concentrating, anticipating, participating, and be pliable, yet firm at the same time, with “Barbie” arms, as we say.

I’ve written before about the other types of dancing that I do, and about the joy of dancing in general. But I was motivated to write this time about “my” Rueda de Casino dancing, because we had a guest teacher last week (he’s coming again 4th Sunday this month!) who delivered a session to us that I felt was one of the best classes of any kind I’ve ever taken. As I said in a Facebook post, all of my dance teacher-leaders are high quality, but this teacher went above and beyond. I feel compelled to try to describe the quality of the session he delivered. I was somewhat astounded, because I never expected to be so, so…engaged, during the sort of organic gathering that we engage in, in a park!

Daniel started the lesson in a loud, clear, articulate voice. He judged the level(s) of the students immediately, and paced the lesson accordingly. We reviewed several easier moves the first hour, and learned and practiced a few more complicated moves the second hour. Often during dance lessons I am frustrated by too much demonstration and not enough practice with the music. Not the case on this day; I felt like we were dancing to the music most of the time. People who came late were immediately roped into the group of dancers. The best part was Daniel’s humor, which, woven throughout the lessons, added a pleasant levity that made things easy and fun. We learned a lot, got plenty of exercise while at it, and I felt that we’d developed an even closer than usual camaraderie with our fellow dancers. One of our senior dancers complimented me on my mastery of a particular move. I’d never had that happen before at Rueda, and I felt that Maestro Daniel had played a big part in my accomplishment. All this was a blueprint for good teaching in general.

I know lots of people who spend lots of dollars and lots of hours on formal salsa lessons. I believe that a few sessions of Rueda dancing will inform both leads’ and follows’ confidence on the floor and repertoire of moves. Aside from our Rueda in the Park (the brainchild of Tania de la Peña, who has her own group in Griffith Park on alternate weekends from our Culver City sessions), there are chances to do Rueda dancing all over town, whenever a so-called “caller” comes on the scene, and a critical mass of Rueda dancers form into a circle. In the summer, when they have the salsa band playing out in the courtyard at the Music Center downtown, I’d see a bunch of people dancing in a circle on the sidelines. Now I can be part of the circle, and who doesn’t want to join a circle!?

For a complete day of dining, dancing and delving into Latino culture, join us right here in Culver City on 2nd and 4th Sundays (next time: 4/27) from 1:30pm, in Media Park. Have brunch prior at Grand Casino Argentinian Cafe on Main Street before. Drop by for Happy Hour after at Kay n’ Dave’s Mexican Restaurant across from Media Park after the Rueda. Dance more Rueda and Salsa for free on the Santa Monica Promenade after Happy Hour until 9 or 10pm. Hasta luego!