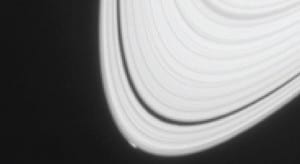 NASA’s Cassini spacecraft has documented the formation of a small icy object within the rings of Saturn that may be a new moon, and may also provide clues to the formation of the planet’s known moons.

Images taken with Cassini’s narrow angle camera on April 15, 2013, show disturbances at the very edge of Saturn’s A ring—the outermost of the planet’s large, bright rings. One of these disturbances is an arc about 20 percent brighter than its surroundings, 750 miles long and 6 miles wide. Scientists also found unusual protuberances in the usually smooth profile at the ring’s edge. Scientists believe the arc and protuberances are caused by the gravitational effects of a nearby object. Details of the observations were published online today by the journal Icarus [dx.doi.org/10.1016/j.icarus.2014.03.024].

The object is not expected to grow any larger, and may even be falling apart. But the process of its formation and outward movement aids in our understanding of how Saturn’s icy moons, including the cloud-wrapped Titan and ocean-holding Enceladus, may have formed in more massive rings long ago. It also provides insight into how Earth and other planets in our solar system may have formed and migrated away from our star, the Sun.

“We have not seen anything like this before,” said Carl Murray of Queen Mary University of London, the report’s lead author. “We may be looking at the act of birth, where this object is just leaving the rings and heading off to be a moon in its own right.”

The object, informally named Peggy, is too small to see in images so far. Scientists estimate it is probably no more than about a half mile in diameter. Saturn’s icy moons range in size depending on their proximity to the planet—the farther from the planet, the larger. And many of Saturn’s moons are comprised primarily of ice, as are the particles that form Saturn’s rings. Based on these facts, and other indicators, researchers recently proposed that the icy moons formed from ring particles and then moved outward, away from the planet, merging with other moons on the way.

“Witnessing the possible birth of a tiny moon is an exciting, unexpected event,” said Cassini Project Scientist Linda Spilker, of NASA’s Jet Propulsion Laboratory (JPL) in Pasadena, Calif. According to Spilker, Cassini’s orbit will move closer to the outer edge of the A ring in late 2016 and provide an opportunity to study Peggy in more detail and perhaps even image it.

WRITE A LUNAR ECLIPSE POEM AND WIN A PRIZE.

Were you excited to see the lunar eclipse on the night of April 14-45? Enough to write a poem about it? Why not try one, and email it to the Astronomers Without Borders (AWB) AstroPoetry Contest? This international astronomy-outreach organization is presenting the contest as a feature of Global Astronomy Month, April 2014.

The contest has separate divisions for children grades 1-6, young adults grades 7-12, and adults. For contest rules and the entry form, see:

In addition to the contest, you can also send your poem to the AWB AstroPoetry Blog, where we post poems daily.  Your blog poem can also include a picture, if you have one.  See the blog at: http://astronomerswithoutborders.org/blog/astropoetry-blog.html

Send your poem (and picture if you have one) for the blog to:

How bright the full moon

Coming out of her eclipse

Poem from the book “First Star I See Tonight: A Celebration of Wonder,” copyright 2007 by Robert L. Eklund.  Book available from Xlibris.com or Amazon.com.