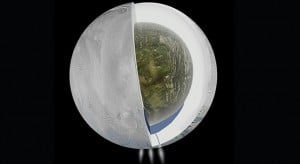 NASA’s Cassini spacecraft and the Deep Space Network have uncovered evidence that Saturn’s moon Enceladus harbors a large underground ocean of liquid water, furthering scientific interest in that moon as a potential home to extraterrestrial life.

Researchers theorized the presence of an interior reservoir of water in 2005 when Cassini discovered water vapor and ice spewing from vents near the moon’s south pole. The new data provide the first geophysical measurements of the internal structure of Enceladus, consistent with the existence of a hidden ocean.

“The way we deduce gravity variations is a concept in physics called the Doppler effect, the same principle used with a speed-measuring radar gun,” said Sami Asmar of NASA’s Jet Propulsion Laboratory in Pasadena, Calif., a coauthor of the paper. “As the spacecraft flies by Enceladus, its velocity is perturbed by an amount that depends on variations in the gravity field that we’re trying to measure. We see the change in velocity as a change in radio frequency, received at our ground stations here all the way across the solar system.”

The gravity measurements suggest a large, possibly regional, ocean about 6 miles deep, beneath an ice shell about 19 to 25 miles thick. The subsurface ocean evidence points to Enceladus as one of the most likely places in our solar system to host microbial life.

“Material from Enceladus’ south polar jets contains salty water and organic molecules, the basic chemical ingredients for life,” said Linda Spilker, Cassini’s project scientist at JPL. “Their discovery expanded our view of the ‘habitable zone’ within our solar system and in planetary systems of other stars. This new validation that an ocean of water underlies the jets furthers understanding about this intriguing environment.”

On the night of April 14th, two significant and spectacular events will take place simultaneously, as Mars reaches its closest point to Earth while the Moon will be totally eclipsed.  This particular lunar eclipse is expected to draw unusual interest because it will be visible from the entire United States, and also because the reddish eclipsed Moon will float very near the striking blue star Spica, as well as hovering to the left of orange Mars. Altogether, the eclipse will be part of a dramatic sky-spectacle.

To viewers in Los Angeles, the eclipse will begin at 9:53 p.m., when the left-hand side of the Moon begins to enter the penumbra, or partial shadow, of the Earth. At 10:58 p.m., it will start to enter the umbra, or full shadow. At 12:06 a.m., it will be fully covered by the umbra. 12:45 a.m. is the time of greatest eclipse, and by 1:24 a.m. the Moon will have moved completely out of the umbra on its way to being completely free from shadow by 3:37 a.m.  All times are in Pacific Daylight Time.

By coincidence, during the eclipse Mars will be making its closest approach to Earth in over four years. Mars orbits the Sun at a speed of 15 miles per second—very similar to Earth’s 18.5 miles per second. The similarity means that after the two orbits align, it takes fully 26 months for them to meet again.

For those wishing to watch these events online, the Slooh Observatory will present them in real time starting with coverage of Mars at 7 pm PDT from Slooh’s telescopes off the west coast of Africa in the Canary Islands and transitioning to coverage of the total lunar eclipse starting at 11 pm PDT. Viewers can watch on Slooh.com or by downloading the Slooh iPad app. Viewers can ask questions during the show by using hashtag #Slooh.