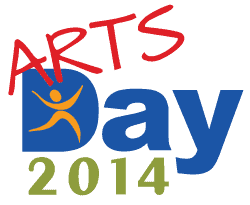 Friday, April 11th, 2014 is ArtsDay: the annual opportunity for Angelenos (and Culvercitizens)  to celebrate the contributions of arts and culture to the community and to talk with elected officials about why the arts are important.

Now in its third year, ArtsDay unites artists, audiences, and arts organizations with the leaders who represent them in City Hall, fostering stronger relationships between those crafting the vision of LA’s future and those who make it a reality.

Come take part in this show of support for the City’s many arts and cultural communities. Head to City Hall for the special breakfast reception, beginning at 8:30 a.m. in the City Hall Rotunda, and meet other arts supporters and friends. At 10 a.m., we’ll all attend the morning’s City Council meeting, which will feature a special presentation about arts and culture in Los Angeles. The first 250 attendees will receive a free ArtsDay 2014 t-shirt.

To find out more about ArtsDay and for the day’s schedule, visit www.artsforla.org/april-11-2014.