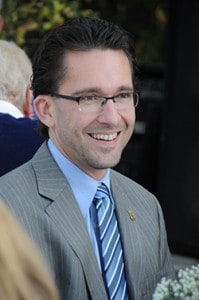 Things could not be more exciting for Team CPK4CC! Voters in Culver City received their absentee ballots Wednesday the 12th. They received our mailer on Monday and several other pieces of mail from our endorsements on Tuesday. The word is getting out, endorsements keep coming in, lawn signs keep going up, and we keep coming out on top at the candidates’ forums!

Our team would like to announce a very exciting KEY ENDORSEMENT that we received! David and Diana Hauptman have endorsed Team CPK4CC!

David is a Former Mayor of the City of Culver City. And Diana is the President Emeritus of the Culver City Youth Health Center. These long-time Culver City activists have decades of service to our community. In fact, Temple Akiba recently honored the Hauptmans for their involvement in and service to the community not only at Temple Akiba, but to the entire city through their extensive involvement.

“We need fresh, new blood on the Culver City Council. Christopher is energetic and is ready to work for our city!” said David and Diana.

We are honored and humbled to have their support!