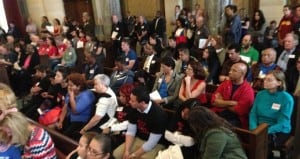 Los Angeles City Council’s Planning and Land Use Management (PLUM) Committee approved two motions that aim to prohibit local oil extraction processes known as fracking. According toStreetsblog, both motions will now be heard by the full City Council this Friday February 28th, where they are expected to pass.

Banning fracking inside L.A. City limits is no small matter. Historically L.A. was dotted with oil wells, and many wells are still currently active. The 1000-acre Baldwin Hills Oil Field has been called “the largest urban oil field in the US.” Many small extraction sites are located in neighborhoods, including the Allenco site and the Murphy Drill site, both in South Los Angeles. In these cases, a small footprint doesn’t necessarily mean small impact. Nearby residents and regulators attribute very serious air pollution issues to these smaller oil operations.

There are two very similar motions working their way through Los Angeles’ legislative processes. Councilmembers Paul Koretz and Mike Bonin introduced motion 13-1152-s1 to use zoning to “prohibit… hydraulic fracturing in [L.A.] until safety and reliability of… water supplies are assured.” Councilmember Bernard Parks and Jose Huizar introduced motion 13-1152 to use zoning to “ensure that public health and safety is protected from… fracking activities.”

Fracking opponents, including many from Culver City, packed yesterday’s PLUM committee hearing. The city’s Public Works hearing room was standing room only, leading to some attendees being diverted to watch the proceeding via video in overflow seating hastily set up in council chambers. Fracking opponents are very diverse.

The diversity of the room was reflective of the many communities and people potentially affected by harmful drilling practices in urban centers. Anti-fracking speakers mentioning their neighborhoods came from Lincoln Heights, San Fernando Valley, Echo Park, Culver City and Whittier. While not in attendance yesterday, members of the Culver City City Council also wrote in support of the fracking bans.
Anti-fracking groups present included Food & Water Watch, Esperanza Community Housing, Community Health Councils, Grassroots Coalition, Strategic Actions for a Just Economy, Citizens Coalition for a Safe Community, and probably others. The most visible anti-fracking presence were South L.A. residents wearing their black and red People Not Pozos T-shirts.

Only two groups vocally expressed their support for fracking: the Western States Petroleum Association and the L.A. Area Chamber of Commerce.

Councilmembers Mike Bonin, Paul Koretz and Bernard Parks each spoke in favor of the proposed bans. They raised fracking concerns from depletion of water supply to causing earthquakes. Each councilmember received loud sustained applause from the large anti-fracking contingent in the room.

Comments from the public followed, also overwhelmingly in favor of banning fracking. The number of speaker requests were too numerous for all to be heard. After just over an hour of testimony, PLUM chair Councilmember Huizar closed comment and read the remaining supporter card names into the record.

Councilmembers Gil Cedillo and Huizar supported both anti-fracking motions, passing it out of committee unanimously. The third committee member, Councilmember Mitch Englander, was not present.

The motions will be voted on by full Los Angeles City Council at their meeting this Friday at 10 am. If it passes, which is expected, it’s going to take a while to take effect. The motion is a sort of policy directive that will then spend months working its way through the city’s Planning Department and City Attorney. Those departments will work out details of an actual ordinance. The ordinance will then return to council for a subsequent vote, before taking effect.

Fracking opponents can count one more small victory yesterday, but there’s still a lot of work to do before harmful oil extraction processes are prohibited.