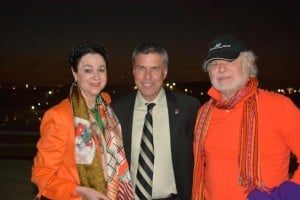 It’s easy to make dinosaur jokes about some political campaigns, but Mayor Jeff Cooper’s February 22nd  fundraiser had a whole new angle – a flying dinosaur poised towards the future. The Pterodactyl building, still a work in progress, was the base for a large tent and several hundred Cooper supporters to rally on a Saturday night.

The sold-out event was hosted by Laurie and Fredrick Samitaur-Smith, (pictured above with Cooper)  the noted developers of the Hayden tract and creators of Conjunctive Points, and it gave guests the opportunity to tour the building and see what this unique structure was turning out to be.

With the Pterodactyl joining structures like the Beehive, the Box and the Samitaur Tower, Conjunctive Points is the home of such exquisitely radical steel it almost makes Disney Hall look old fashioned. Cooper seemed to be allied with the idea that the status quo is not a place to park, but a springboard to what comes next.

When Cooper spoke to the crowd to thank his hosts and supporters, he offered “It was humbling to stand in the midst of all this construction and look out across the Culver City skyline. I thought about how far we’ve come in the past four years. But I also thought about the future and the amazing things we can do by working together, to make our city even greener, to attract more cutting-edge businesses, and improve our quality of life. ”

After dinner, catered by The Point (another hidden treasure of the Hayden tract) the Samitaur-Smiths both took to the podium to speak briefly but enthusiastically about Cooper, pointing out his record as mayor and his commitment to the future. Laurie Samitaur-Smith lauded Cooper’s perspective and exclaimed, “Let’s make Culver City a great place to do business!”

Eric Owen Moss, the internationally known architect who has made the site famous for state-of-the-art avant garde design, also offered a few words, laughing that “I can’t remember the last time Laurie was that enthused about anyone. This is a moment to take note.”

Moss also recalled what the Hayden tract had been before the vision of Conjunctive Points, “…broken bottles and blowing bits of newspaper decorated the rusting and abandoned rails between the empty buildings. What will it look like twenty years from now? What will it mean to us to look back from the vantage point of the next twenty years and see how much more positive change we can create?”

As election day comes closer, the Cooper campaign seems to have a great deal of support in the community. When asked, Cooper offered, “I’m here to serve because it’s important that we are looking ahead. We want Culver City to go as far as it can go.” With the view from top of the Pterodactyl sweeping over the city towards the lights of the train, even the sky may not be the limit.