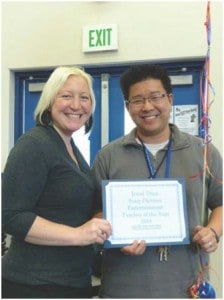 Productive, engaging, nurturing relationships between teachers and students along with long-term devotion that is demonstrated in so many exceptional ways are key to CCUSD’s success.

Chair of the Culver City High School math department and coach for the MESA (Mathematics, Engineering, Science Achievement) Team, Jerod Dien received a standing ovation from his colleagues when he received this award. Students in the library cheered when they heard the news.

ROTARY CLUB OF CULVER CITY CLASSIFIED EMPLOYEE OF THE YEAR 2014:

Virginia Reynosa has been cooking for the children in our Office of Child Development Program for 37 years.