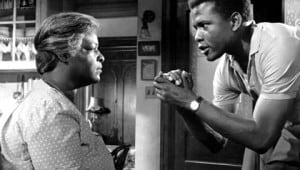 Black Talkies on Parade is pleased to present a screening of Daniel Petrie’s A Raisin in the Sun with special guest Mamie Hansberry, sister of the film’s writer Lorraine Hansberry. A Raisin in the Sun began as a play that debuted on Broadway in 1959 and ran for two years. The story was then adapted into a film featuring the play’s cast including Sidney Poitier, Ruby Dee, Claudia McNeil, Diana Sands, Ivan Dixon, Louis Gossett, Jr. and John Fiedler. The film centers on the Younger family’s life in Chicago’s south side and their struggles with poverty and racism, which came from experiences the Hansberry faced in their own lives. The film won several awards including the Gary Cooper Award at the Cannes Film Festival and Best Actress for Ruby Dee from the National Board of Review.

The afternoon will be hosted by Lloyd Clayton and will feature a discussion with Mamie Hansberry following the film. Come celebrate a film that remains a true American treasure.