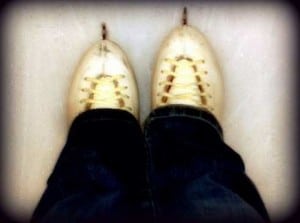 “Did you ever get the feeling that the story’s too damn real and in the present tense? Or that everyone is on the stage and it seems like you’re the only person sitting in the audience?”

Another turn-around on the ice; what was once a local news story has become a classic Greek drama. Heroes, villains, a huge chorus, and a plot that is getting more complicated on every turn.

The Culver City Ice Arena, which formally closed on Feb. 2nd, was set to re-open (dramatic surprise!) for a six-month encore in March, until the Fates intervened; not Planet Granite or even the Landlord Kargozian, but the Culver City Fire Department.  The ammonia that is present in the ice has been discovered to be a public health hazard, and must be removed.

Since the rink had been given a clean bill of health by the Fire Dept. on all of it’s regular inspections over the years, how was it just now discovered to be hazardous? The FD noted that they were not looking for long-term problems; they were just doing a basic once-over to make sure nothing was wrong. Fire Chief Chris Sellers offered that that the removal and re-installation of a new refrigeration system will cost about $15,000, but with so many players on the ice, who will pick up the tab?

The many families in Culver City that have rallied, carried signs, turned out to council meetings and posted online have been a huge force for keeping the rink open. Now they may have to decide how many more rallies and meetings they are willing to support. This issue is not going to be cooling off any time soon.

While the tune ‘Skating Away’ starts off with the sound of someone actually just beginning their day, pouring coffee, stirring in a bit of sugar, the lyrics bring in what sound like the history of a life, and the music gets a bit faster and more complex with every new chorus.

Which feels like what we have here, another layer of complications on what had at first seemed to be a rather straightforward story.

What breaks my heart is that all this is happening during the Winter Olympics, a moment when people tune into to watch the foremost skaters in the world complete in ice dancing, figure skating, speed skating and hockey. This is the season when children ask their parents, “Could I do that?” and parents find the lessons, the coaches, the time and the commitment to make those big dreams come true.

When Tai Babalonia, two-time Olympian, spoke to the City Council weeks ago as one of the many supporting the rink, she offered up her memories of training at the Arena. In addition to being the chilly heart of a warm community, it’s been a doorway to fame and accomplishment for many.

For Culver City, the rink has been our portal to the winter. While that entryway is still ajar, it is not open at this moment when children’s dreams can be picked fresh and held frozen through the hours and years of effort it takes to reach for the stature of international expertise. We will never know who lost out because of the cold cost of business as usual; rent increases, old tenants and new leases,  dangerous chemicals and an empty building.  And the clinking metallic sound of lots of people hanging up their skates.

There are answers, we don’t know yet what they are. Sometimes, things stay frozen for years.