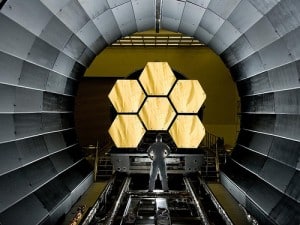 An infrared camera, which will form the heart of NASA’s James Webb Space Telescope (JWST), has joined three other instruments at NASA’s Goddard Space Flight Center to be mounted in the nascent telescope structure. The Near Infrared Camera (NIRCam) will function as the central imaging component of JWST, which will replace the Hubble Space Telescope toward the end of this decade. Designated one of the space agency’s three highest mission priorities, the Webb telescope is a joint project of NASA, the European Space Agency and the Canadian Space Agency. As the space telescope’s prime camera, NIRCam will make JWST the most powerful space telescope ever built, enabling it to peer deeper into space and further back in time than any other instrument before. With its 6.5-meter (21-foot) mirror, JWST will allow observation of the most distant objects in the universe. NIRCam was designed, built, and tested by a UA/Lockheed Martin team at the company’s Advanced Technology Center in Palo Alto, Calif., under the leadership of Principal Investigator Marcia Rieke. She is a Regents’ Professor at the UA Department of Astronomy/Steward Observatory. Lockheed Martin is responsible for the optical, mechanical, structural, thermal and electronic precision mechanisms and the control software of NIRCam, while its advanced infrared detector arrays come from Teledyne Imaging Systems. “The instrument operates out to wavelengths about ten times that of visible light, letting it search for the first galaxies. It is the cosmic redshift that has moved the outputs of these ‘first light’ sources into the infrared where NIRCam operates. We will survey selected regions on the sky to find candidates; the other instruments on JWST can then probe these objects in detail to test if they really are that young,” Marcia Rieke explained. “The instrument can also peer through the clouds of gas and dust that hide the first stages when stars and planets are born and will provide insights to how planetary systems around distant stars form and evolve.” NIRCam’s delivery to Goddard Space Flight Center marks the first time all of James Webb’s instruments have come together. “We are excited that NIRCam is about to be integrated with the Webb Telescope hardware,” said Jeff Vanden Beukel, Lockheed Martin NIRCam program director. “Next, it and the other instruments will be tested to prove their ability to function as a unit.” NASA’s James Webb Space Telescope will be the most powerful space telescope ever built, capable of observing the most distant objects in the universe, providing images of the first galaxies formed, and observing unexplored planets around distant stars. A joint project of NASA, the European Space Agency (ESA) and the Canadian Space Agency (CSA), Webb is the successor to the agency’s Hubble Space Telescope. All 18 of Webb’s primary mirror segments are now housed in the Goddard clean room. Its 1.3 million cubic feet of dust-free space make the clean room one of the world’s largest. All four of Webb’s science instruments are within feet of the mirrors. The Webb telescope will be fully assembled by 2016 and then moved to NASA’s Johnson Space Center for additional testing prior to its launch, planned for 2018. Upon launch, it will be operated as an observatory open by competitive proposal to astronomers worldwide.