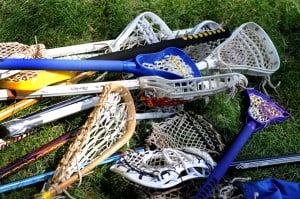 When you think of youth sports, many people only think of AYSO soccer and Little League baseball. Local sport parents are discovering that besides the two favorites, Culver City has a growing reputation as a center for the exciting game of lacrosse.

Lacrosse is played with netted sticks, and a solid rubber ball on a soccer-sized field. As a youth game, lacrosse has the appeal of a contact sport such as football, but with the agility and running elements from soccer. Players wear protective gear to prevent injury to head and upper body. Lacrosse was historically played by Native Americans, and has been declared as the National Summer Sport of Canada.

Culver City’s Youth Lacrosse program has been developed by Casey Chabola, a familiar name to many longtime Culver residents as an active contributor to Culver City sports. Coach Chabola has single-handedly built up a solid community of enthusiastic players and parents – even so, this year’s turnout to the Fall Lacrosse clinic was surprising. “Last year, we had about 35-40 kids, this year was almost twice that. That was amazing,” laughs Chabola. “Some of these kids may want to do something else, but usually they have a lot of fun on the first practice and bug their parents to bring them back.” The appeal to parents is easy to see: activity in sports keeps our kids active, and develops physical skill and endurance. The kids are well-protected, and the games are fast paced and exciting. “Plus, you’re done in an hour, just like soccer,” quipped one parent.

The Culver City Youth Lacrosse program began 3 years ago, when Casey’s son, Joey, became interested in filling the gap between soccer and baseball seasons. “That’s how I got into the youth lacrosse leagues,” Chabola says. “I played baseball growing up, but started playing lacrosse in college. I wanted to bring the youth of our community closer together by building a program around this great sport.” Drawing on his talent pool from his Culver City High School lacrosse program, Coach Chabola grew the youth lacrosse program using a hidden asset: teen coaches. “For our high school players, it’s a good way to keep their head in the game, learn more about responsibility, give back to their community and sport, and cover their public service hours,” says Chabola. “Plus, the kids listen to them more than they listen to parent coaches.”

Culver City Youth Lacrosse games are being played for three more weeks, into February on Saturdays in the new Jerry Chabola Stadium, named in honor of Casey’s father. Game schedules for Winter League play are available at the West LA Lacrosse website; information about upcoming lacrosse clinics and summer camps in Culver City is available at www.cclaxclub.com.