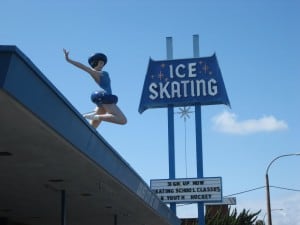 The Mike Balkman Council Chambers were filled to capacity on Jan. 13 with many people standing along the walls and crowding the foyer in the back, hundreds of people having turned out to address the most important item not on the agenda – the impending closure of the Culver City Ice Arena.

Cary Anderson offered his thoughts, saying “The reason we have the car show is because hot-rodding started in Culver City, at Piccadilly’s – and Piccadilly’s is not here anymore. The bowling alley is not here any more- The Rollerdome – that’s not here any more.” Holding Julie Lugo Cerra’s book on the history of the city, Anderson continued, “Would it be better if we closed Tito’s Tacos and replaced it with Taco Bell? Would it be better if we closed the Culver Hotel and replaced it with Motel 6? This is about our culture, and our identity, but we are also going to have to accept that the rink is going to fade into the past.”

City Manager John Nachbar, almost succeeding in keeping a tone of desperation out of his voice, reminded the crowd, “This is private property. They [Mike A. Karagozian, the owner of the property on which the rink is situated] have entered into a new lease with Planet Granite. There is virtually nothing that the city can do to keep this as an ice rink.”

“While the idea of the city buying the property to keep it as an ice rink has been discussed,” Nachbar continued, “The city is no fiscal position to be able to accomplish that. Questions have arisen about the historical designation of the ice rink but that does not control the use of the site, the historic designation would only signify the building itself, so granting historic designation would not insure it to continue as an ice rink.”

While addressing the huge and passionate crowd who were there to persuade the city to help, Nachbar concluded, “I have done my best to present to everyone the limits of this elected body.”

Two- time Olympian skating star Tai Babalonia came to the podium with her memories of the rink. “I called it my frozen playground. I remember when my coach insisted I hold Randy’s hand and skate around the ring, and I did not want to hold Randy’s hand, but we have been holding hands and skating around for 45 years now. Those big kids in the stands, Peggy Fleming, Richard Wilson, they were my idols. Think of the up- and- coming ice skaters and hockey players who are not going to have their rink anymore.”

Another speaker, dressed in full hockey uniform, brought up the fact that melting the ice would release more than water. Ethylene and ammonia, which are used in the refrigeration system that keep s the ice hard, might cause a toxicity problem when decommissioned.

Shannon Takahashi delivered two large binders of petition signatures to City Clerk Martin Cole saying “This is how many people really care about this.”

Many speakers pointed out that the folks who come here to skate also come here to eat and shop, and do all the things that parents need to do while their children are at skating lessons, adding sales tax to the city’s coffers and support the local businesses.

Gary Kemp, one of the skating instructors at the rink offered that “All this is happening because the landlord wants more money, so maybe we could have a rock climbing wall in the back, and keep the rink, that could double their income.”

Kevin Klowden suggested going back to the Los Angeles Kings hockey team for a long-term lease as a possible solution. Using the example of El Toro airbase in Orange County and their challenges transforming into parkland because of all the jet fuel in the ground, he agreed that the ammonia in the compressors keeping the ice cold maybe enough of an environmental hazard to prevent Planet Granite from opening.

After an hour of comments, it was time for the council to address that matter.

Nachbar offered that the city’s job “is to be to ensure that we do everything possible to assure that public health and safety is maintained.”

O’Leary noted, “The rink has created a sense of place, and this is a quality of life issue.”

Vice Mayor Meghan Sahli-Wells, looking as deeply distressed as any of the skaters, said  “It’s pretty heartbreaking to sit up here and admit we don’t have the powers you think we have when it comes to what we can and can’t do. I’d like more discussion about historic designation – and environmental review – this is not get your hopes up. If we had magical powers, we’d be a lot more popular than we are today. It’s heartbreaking to say we just can’t do it, we can’t buy this property.”

Council member Jim Clarke stated “I want to support looking at the environmental issues on this – Two areas I want to focus on, and I’ m curious if we can discover what the financial impact is of the ice rink as to sales tax and such, and what Planet Granite will contribute, and the possibility of using the parking lot as the rock climbing zone.”

Council member Andy Weissman looked into the long history of the place, saying, “We began looking at preserving the ice rink four years ago, the last time the lease came up, and the fact is that the property owner has entered into a legally binding agreement with a new tenant. Any changes will be based on the fact that these parties need to be willing to amend their agreement. As the vice mayor said, we don’t want to give anyone false hopes.”

“This is a community that has always adapted,“ he said, “and as much as we would like to preserve the ice rink, there’s not a lot we are going to be able to do here.”

Mayor Jeff Cooper looked grim. “There is a real sense of sadness here this evening. Sitting here as an elected official, there’s not a lot I can do. I support agendizing an information item, but we have to accept our limits.”

O’Leary spoke to the audience in the room “We might not be able to do anything, but you can. I believe in the power of the people.”

Editor’s Note – Does a business want to come to a city where they are really not wanted? Let Planet Granite know that you object, and that closing the rink is not winning them fans. If 100,000 people object, they may change their mind- If 500,000 people object, odds are even better. Don’ t just sign a petition – send an email to [email protected]