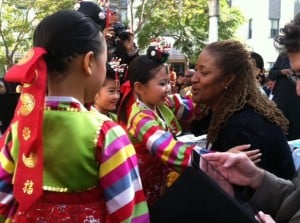 “Do you remember when we used to have smog alerts? When people were told not to go outside, and children could not play outside at recess because the air was so bad?” State Senator Holly J. Mitchell asked the crowd at her swearing-in ceremony at Sony Studios on Jan. 11. “Today I woke up to blue skies, and sweet, clear breezes, because government changed that, and smog alerts are a thing of the past. That is what government can do.”

Mitchell is a swiftly rising force in state politics, elected to higher office only three years after winning her seat in the state assembly, not simply owing to the vacancy created by Curren Price’s move to the Los Angeles City Council, but also by the deep and broad support of the community.

With excellent music provided by the Inner City Youth Orchestra, the afternoon at Sony Pictures Entertainment was a celebration of Mitchell, both her deep roots and her high ideals. Many in attendance were friends and family who had known Holly for decades. Those who commented were quite proud of her accomplishments, and not at all surprised.

Faye Clark exclaimed, “We grew up together. Holly has always been that leader-type. She know what she wants to see go on, and she makes it happen.”

Joanna Gavin said that she and Holly became friends when their children were at school together. “She’s got a way to make things things happen, that’s for sure.”

The ceremony, mc’d by the affable Kafi Blumenfeld, former president of Liberty Hill, began with a  color guard by the Los Angeles Girls Scout Council, a representation by Jewish War Veterans, and an outrageously lovely rendition of “The Star-Spangled Banner” by Vox Femina, the Culver City based women’s chorus.

“Culver City is very fortunate to be represented by Mitchell in Sacramento,” a fact lauded by Vice Mayor Meghan Sahli-Wells. “If I  were to list all of Holly’s political accomplishments, we might be here all afternoon and well into the night,” said Sahli-Wells, “but I’ll just focus on three; Holly helped Culver City out of a $20 million dollar debt by intervening with the State Department of Finance on our behalf, she joined us for an important panel on affordable housing, and third, she is in favor of a moratorium on fracking until we understand more about the process.” Sahli-Wells, along with council members Mehaul O’Leary and Jim Clarke presented Holly with a plaque from the city presented in a reusable bag from Ballona Wetlands Renaissance, celebrating the plastic bag ban that the city began on Dec. 28, 2013.

The Jung Im Lee Korean Dance Academy presented the Traditional Flower Dance, and the girls offered bouquets to Senator Mitchell as a symbol of their congratulations on her office.

Mitchell’s inaugural address resonated through the audience as she spoke of the many bills she had sponsored in the assembly, focusing on families and youth in need. She noted that California was “the only state to pass a bill that expanded women’s access to health care,”as opposed to the 14,000 other bills in many other states that limited or criminalized women’s access to health care.”

California State Attorney General Kamala Harris administered the oath of office, after her own comments of congratulations and commitment to keeping the legislative process open for more women and under-represented minorities to take part in and benefit from the possibilities of government.

Rabbi Shapiro, reflecting poetically on Holly’s previous leadership position with the non-profit Crystal Stairs quoted the Langston Hughes poem “Mother to Son, ” and Holly, off to the side of the stage, recited the closing lines with him. “I’se still going honey, I’se still climbing…”