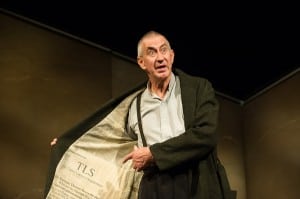 “I’ll Go On” by Samuel Beckett opens Sunday, January 12, 2014, at 6:30 p.m. at the Center Theatre Group/Kirk Douglas Theatre.  A celebrated interpreter of Beckett, Barry McGovern is known to Los Angeles audiences for his performance as Vladimir in the acclaimed 2012 production of “Waiting for Godot” at the Mark Taper Forum (LADCC Awards, Best Revival and Best Ensemble; Ovation Award Best Production and Best Ensemble).

“I’ll Go On,” which is based on three of Beckett’s novels – “Molloy,” “Malone Dies” and “The Unnamable,” is directed by Colm Ó Briain. Texts from the works have been selected by Gerry Dukes and McGovern. First performed at the Gate Theatre in Dublin in 1985, “I’ll Go On” has toured worldwide to great critical acclaim. This is the first time McGovern will perform his tour-de-force, one-man show in Los Angeles.

Culver City has joined with Center Theatre Group to support a special $10 ticket offer for residents and people who work in Culver City. Dates for the special offer are Tuesday, January 14 at 8 p.m. and Wednesday, January 15 at 8 p.m. Culver City patrons can purchase discount tickets in person or by phone using the promotion code CULVERCITY and providing a Culver City business or residence address, or by visiting www.centertheatregroup.org/CulverCity. (Discount tickets will also be offered for the CTG/Kirk Douglas Theatre production of “different words for the same thing” which plays May 4 through June 1, 2014.) The discounted tickets are available on a first-come, first-served basis. This program is made possible in part by a Culver City Performing Arts Grant with support from Sony Pictures Entertainment.