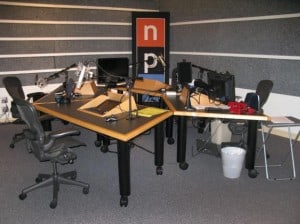 “I still feel like it’s in the reinvention stage,” Arun Rath, host of Weekend All Things Considered, said from his office at NPR West, the largest production center for NPR outside of D.C. “I feel we’re getting closer to landing, and a little bit more of a sense of who we are, but it’s a pretty major thing. And not only this show, but almost all of us are transplanting our lives from the East Coast and other places as well, so we’re all going through this radical personal transition at the same time as the show is transitioning. I don’t know that any of us feel totally settled yet.”

According to Mackenzie Weinger  of Politico, the relocation to NPR West in Culver City wasn’t the only major shakeup for the show: Rath, previously with PBS Frontline, joined the program as the new host for its Los Angeles launch in September. For the NPR institution — the radio show had been broadcast from D.C. for 36 years before it set up shop in LA — 2013 turned out to be a year of reinvention

And now, a few months since leaving D.C., those at the program say they certainly haven’t abandoned their political coverage, but there’s no doubt Weekend All Things Considered has been influenced by the move outside the Beltway.
From its new West Coast perch, the show — which broadcasts every Saturday and Sunday on NPR member stations — has covered everything from the Southern California’s wildfires to Las Vegas’ attempt to revitalize its economy. Rath said the program hopes to use its new base to cover cultural and political news from all across the western United States, with stories on Seattle, Wash., Yuma, Ariz., and Marine Corps Base Camp Pendleton likely for future segments.

“The takeaway from our move is that we’re now doing national stories that are more West-region focused,” said Steve Lickteig, the supervising senior producer for All Things Considered’s weekend broadcasts. “We count that as almost from Kansas to California. We’re trying to do more stories that are looking at the country from the other way — instead of East to West, we’re looking West to East, which is something that NPR hasn’t done because all of our shows were based in D.C.”

“We have not given up on doing political reporting,” he said. “It’s just that it’s not at every turn for us as it might have been.”

The goal, as always, is to balance being a hard news program that covers the major political and world news stories of the week with being a weekend show that also showcases quirky cultural news, he said.

“How do we do both things and do them both well, and not be so hard news driven that we bore the socks off people, or be so light and fluffy that they’re like, ‘There’s no substance here,’” Lickteig said.

Rath pointed to a December segment about New York Times reporter James Risen as an example of what the show has done with its political coverage in its western incarnation.

“It’s gotten practically no attention,” Rath said. “I remember when Judy Miller was going to jail for the Scooter Libby case and all that, it was a media circus. And I don’t know if because it doesn’t quite fit in with the narrative that people have, but it’s kind of an amazing case where it’s stuff that people were getting very upset with stuff in the Bush administration, when Alberto Gonzales even mentioned the Espionage Act, our colleagues were shrieking about it, and now the Obama administration is actually employing the Espionage Act and prosecuting people with it and it’s getting not a lot of attention.”

Rath interviewed Risen, who was in San Francisco for a conference at the time, for the broadcast, and spent about 10 minutes really digging into the questions of the case. “That was one where we might have a disadvantage where we are, but no one back East was doing it,” Rath said.

Lickteig, who started with the show in August of 2011 and moved the program from D.C. to LA, noted that a major part of the decision to relocate was NPR’s need for a contingency plan if the D.C. headquarters were to become incapacitated.

“I think when Hurricane Sandy happened, there were so many issues with New York, our concern and worry about the New York facility because we have a bureau there, and we started thinking like, god, what if this happened in D.C.?” Lickteig said. “What would we do? How would we hold the air? New York has reporters, but they don’t have a show. And, you know, you could throw somebody on the air and keep them on, but they wanted to have a show infrastructure way far away from the East Coast so if something really bad happened, we could go on the radio and we could hold the air for as long as we need to until, you know, reinforcements arrived.”

NPR also made the choice to grow its Culver City facility, and so the weekend edition of All Things Considered became NPR’s only West Coast based news program, Lickteig said.

Its new home has definitely given the show a chance to broaden its scope — both Lickteig and Rath pointed to an interview in studio with actor and comedian Patton Oswalt on “Moby Dick” as a highlight for the NPR West incarnation of the show.

“Patton Oswalt was such a treat,” Rath said. “I’m a big comedy fan, and we’ve now had a number of great comedians on the show and it’s been kind of funny how they’ve been so nice. As a class of people, like the nicest people to interact with are the edgy comedians that I kind of would expect to be an asshole because on stage they do that thing, but they’re so humble and sweet.”

But, Rath said, even though “we’re on the West Coast, all of the stuff that people like the most in terms of our political coverage is still there.”