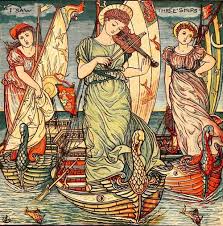 How do you define a friend? Why do you keep one or lose one? While these questions may come up at any time of the year, they can get pretty crunchy over the holidays – Sending cards, party invites, who to gift; all that can get weighty if you feel the need to be Santa. Have they been naughty or nice?

I’m charmed by the slang I got from my older daughter, who calls relationships and friendships just ‘ships. I’m reminded of calling parents “the ‘rents” but that one had the overtone of ‘those people who pay my rent…” and ‘ships are a gorgeous metaphor for the currents that flows though our personal connections, the shores we wash up on, or the harbors that we call home.

I’ve given up on several friends in the last year, and it’s been sad. These are all people I’ve known for a long time, some of them decades, and they each have talents that could (and have) made them world class in their respective fields. But I do not consider loyalty to be a virtue. If the reason you are connected to someone is simply habit, then it’s a habit to question.

People have taken me off their list in the last year as well – For reasons I can only imagine, because they have not told me; my politics, my religion, and my vocation are not things I’m going to change because someone else does not care for them.

But unlike ending a relationship, which people tend to do in clear unmistakable terms (Dear John, I’m sorry but our romance is over…) I don’t think it’s a good thing to end a friendship the same way. (Hey Joanie, I know you and I have been friends for a long time, but I’m not comfortable hanging out with you anymore…) It feels cruel.

While I worry that I might be taking the easy way out as the un-friender, (Is honesty that important?) I feel wistful and curious about being un-friended; what did I do? Or what is it about me? (Do I really want to know?)

Is fading out to radio silence really the best way to go?

What I won’t do is the 21st Century term “frenemy.” I’m not going to be good to someone while they are present, and then turn around and be bad when they are over the horizon. The criticism we give out in our culture is not really constructive, and most of us are aware of our faults to the point of being self-conscious. So while every friendship has it’s tipping point, is it better to be honest when saying goodbye, or be kind?

It’s a fairly obscure Christmas carol, I Saw Three Ships Go Sailing By, and when I was young I imagined it to be like The Wells Fargo Wagon from the Music Man – transportation for wishes to come true.

Ending ‘ships may just be that simple – allowing their trade winds to blow them where they need to go, knowing that the place where we met is behind us and that we just need to travel in new directions.