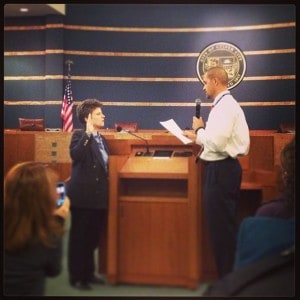 The first order of business for the Culver City Unified School Board meeting of Dec. 10 was to swear in the recently elected. With Superintendent Dave LaRose offering the familiar “Raise your right hand and repeat after me…” re-elected Kathy Paspalis and the newly elected Steve Levin and Sue Robins each promised to uphold both federal and state constitution, defending our schools from all enemies foreign and domestic, and perform their duties, which they did by jumping right into the evening’s agenda.

The request to name the Youth Health Center after long-time school nurse and health activist Sandy Seigal was supported by several speakers; current school nurse Diana Castro, seasoned leaders and administrator for the youth health center Diane Hauptman, and Andy Alexander. Tales were told of how Sandy had found funding, corralled support and fought off anti-choice protests to open the center with help from UCLA. Paspalis offered the only question – “Sandra or Sandy?” and LaRose responded that the family would be contacted as to their preference. (Considering that were were sitting in the Mike Balkman Council Chambers, and not the Michael Balkman Council Chambers, it seems Culver City likes to remember local heores that way they were called in life)  Sandy’s admirers were delighted that the board would consider naming the center for her, and with a swift and unanimous vote, it was done.