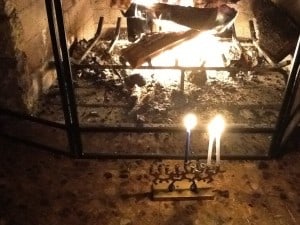 What was that whole “Thanksgivukkah” thing last week?

A colleague saw me in the copy room, and wished me a “Happy Thanksgivukkah.”
Most people would be nice and say, “Thank you, same to you.” But, not me. I gave forth with a ten minute diatribe to all present about how insignificant it is that “this is the only time in our lives that we’ll see Thanksgiving and Hanukkah fall on the same day.” Wah, wah, wah.

The point is this: Hanukkah has nothing to do with ANY of the other year-end holidays that are observed in any country or culture of the world. Just as the Brits don’t celebrate America’s liberation from their empire on July 4th, the Greeks (Seleucids) don’t commemorate the liberation of the Hasmoneans from their particular tyranny. I stopped myself from calling to complain about a radio announcer I heard last week, who, out of habit, talked about how “Christmas and Hanukkah are coming up next month.” No, they are not. Hannukah will have been over.

What I do love is that the world is finally learning, with this particular year as an opportunity, that Hanukkah is not linked with Christmas at all religiously, or otherwise. The two holidays of Christmas and Hanukkah are only related, and I repeat only, commercially. And this whole Thanksgivukkah thing: there are lots of things that won’t happen again for 80,000 years, or maybe
ever.

I recently attended a lecture at USC with a panel of experts who spoke at length about the how’s and why’s of Hanukkah’s juxtaposition with Christmas in America. In short, it has been a sign of the effort of Jews to fit in with the Christian culture that is America. Non-Jewish America feels comfortable with the relative “tolerance” that is perceived from including Jews in the year end holidays.

Non-Jews have been asking me, why DO the dates of Hanukkah fluctuate? Just as when CCUSD’s union chose the day before Thanksgiving as a local holiday instead of the Jewish New Year, most people didn’t notice the earlier observance our holier-than-Hanukkah Rosh Hashana this past September. For the first time in who knows when, we observed it closer to Labor Day than to Columbus Day. If schools were not going to close on Rosh Hashana, they had to either start in August or a week after Labor Day, or they’d inelegantly have had a bunch of people out in
the same week school started.

The reason why Jewish holidays fluctuate each year is because we observe a different calendar. The western world observes what is called the “Gregorian calendar.” This is sometimes called the “Western” or “Christian” calendar. It was adopted in 1582, under the administration of Pope Gregory XIII, hence, “Gregorian.” In this, and in many other ways, Jewish people retained their own ways of doing things. This cultural allergy to assimilation is what has kept Jews as “the other,” in many, no most, societies of the world.

After the Civil Rights revolution of the 1960’s, our American society has made sweeping efforts to be inclusive and “tolerant” of all cultural, religious, physical, gender, intellectual and other differences. We celebrate how different, yet the same, we all are. Occasionally, however, I think it would be
refreshing to point out our differences themselves. In this area, I am knowledgeable about Japanese culture, and can make educated, informed, even insightful observations about the Japanese. When it comes to Jews, however, I can tell you like it is. I speak from experience.

My mother used to tell us that she didn’t like people to make a big deal of her birthday, just once a year. She’d tell us that she preferred to be honored all year long. I guess that’s how I feel about the Thanksgivukkah thing. It’s like, don’t honor my Hanukkah just because it is so easy to do so as part of Thanksgiving. Everybody loves it when Hanukkah comes together with Christmas, because on those years, a generic “Happy Holidays” suffices for everyone. Now, people won’t have anything to say to us Jews around Christmas. Instead of all the Happy Thanksgivukkah wishes, I’d prefer to have my differences respected and honored all year long.