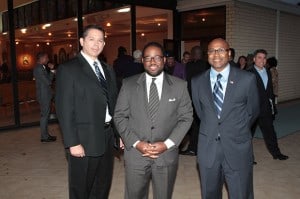 Today’s the day – if you have not already mailed in your ballot, walk yourself over to your polling place and cast your vote for Sebastian Ridley -Thomas.

While I do think it’s important to endorse candidates, this election is so unbalanced, it seems almost embarrassing. There are three candidates – Former Culver City Council member Christopher Armenta, Sebastian Ridley-Thomas, the son of Los Angeles County Supervisor Mark Ridley-Thomas, and John Jakes. President of the Olympic Neighborhood Council (pictured above left.)

You have probably heard something of Armenta – you have quite likely heard nothing about Jakes. But everyone in the district has gotten flyers in the mail promoting Ridley-Thomas, sometimes as many as four in one day. With a war chest of more than $400,000 and endorsements that run the entire length and width of the Democratic party, from Senator Barbara Boxer to Culver City School Board President Kathy Paspalis, Ridley- Thomas seems to have the support of just about everyone in elected office.

As often happens in our local elections, there just isn’t that much space from one candidate to another in terms of ideology. Everyone is anti-fracking. Everyone is pro-Expo train. This isn’t one to be decided on differences.

Holly Mitchell built the office into a great community service organization, with events like Christmas in July, and any candidate that takes her seat would do well to just follow her example.

While I tend to distrust candidates that have too much money – I could paper a wall of my office with the amount of literature I’ve gotten in the last month – and I’m very challenged by candidates who are not old enough to run for President, I’m making an exception here. Not because of the official endorsements, but because of the word on the street.

The people who benefited from Ridley-Thomas the elder are the constituencies that are often the least served – low income women and children, people in areas where government help really does make a difference. People who are funding this awesome war chest are health care organizations like Planned Parenthood.

So, I’ll give the guy my vote and see if he can stand up to it.

If there is not clear winner, a run-off will be scheduled for February, when we will probably be hip-deep in the the next Culver City Council election. The 54th Assembly District is a lot more than Culver City, and we should support the candidate that will serve best.