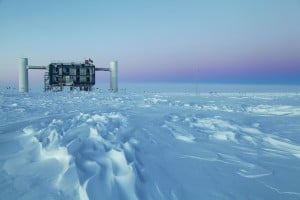 The IceCube Neutrino Observatory, a particle detector buried in a cubic kilometer of Antarctic ice, is a demonstration of the power of the human passion for discovery, where scientific ingenuity meets technological innovation. This week, nearly 25 years after the pioneering idea of using ice to detect neutrinos was first suggested, the IceCube Collaboration has announced the observation of 28 very high-energy particle events that constitute the first solid evidence for astrophysical neutrinos coming from extragalactic space.

The research appeared in the Nov. 22 issue of the journal Science.

“This is the first indication of very high-energy neutrinos coming from outside our solar system, with energies more than one million times those observed in 1987 in connection with a supernova seen in the Large Magellanic Cloud,” says Francis Halzen, principal investigator of IceCube and professor of Physics at the University of Wisconsin-Madison. “It is gratifying to finally see what we have been looking for. This is the dawn of a new age of astronomy.”

Because they rarely interact with matter, the nearly massless subatomic particles called neutrinos can carry information about the workings of the highest-energy and most distant phenomena in the universe. Billions of neutrinos pass through every square centimeter of the Earth (including our bodies) every second, but the vast majority originate either in the Sun or in the Earth’s atmosphere.

Far rarer are neutrinos from the outer reaches of our galaxy or beyond, which have long been theorized to provide insights into the powerful cosmic objects where high-energy cosmic rays may originate—including supernovas, black holes, pulsars, and quasars.

IceCube, run by the international IceCube Collaboration and headquartered at the Wisconsin IceCube Particle Astrophysics Center (WIPAC) at UW-Madison, was designed to accomplish two major scientific goals: measure the flux, or rate, of high-energy neutrinos; and try to identify some of their sources. UW-Madison is the lead institution, and the international collaboration includes 250 physicists and engineers from the U.S., Germany, Sweden, Belgium, Switzerland, Japan, Canada, New Zealand, Australia, U.K. and Korea.

The 28 high-energy neutrinos were found in data collected by the IceCube detector from May 2010 to May 2012 and analyzed for neutrino events exceeding 50 teraelectronvolts (TeV) coming from anywhere in the sky. The events cannot be explained by other neutrino fluxes, such as those from atmospheric neutrinos, nor by other high-energy events, such as muons produced by the interaction of cosmic rays in the atmosphere.

IceCube is comprised of 5,160 digital optical modules suspended along 86 strings embedded in a cubic kilometer of ice beneath the South Pole. The National Science Foundation-supported observatory detects neutrinos through the tiny flashes of blue light, called Cherenkov light, produced when neutrinos interact in the ice.

“IceCube is a wonderful and unique astrophysical telescope—it is deployed deep in the Antarctic ice but looks over the entire universe, detecting neutrinos coming through the Earth from the northern skies, as well as from around the southern skies,” says Vladimir Papitashvili of the National Science Foundation (NSF) Division of Polar Programs.