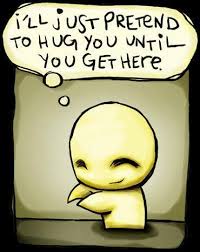 My father, may he rest in peace, never kissed or hugged my sister and I. I recall stilted pecks on the cheek that he gave my mother from time to time, but only on special occasions. My mother, conversely, would give us big, glasses-skewing, bear hugs and wet kisses. She’d be the one in the photos with her arms around my father, instead of the other way around. To this day, my sister and I do not greet each other with hugs, and certainly not kisses, ever. Familial kisses and hugs are reserved for my two sons; I always have to have a hug and a kiss from them when parting.

Friends know not to come at me with an open armed embrace. I’ve trained a few of them to ask if they might be so brazen as to touch my arm or my shoulder or back, and I occasionally allow it. One dance friend forgot who I was, and took to tightly clutching me in his arms and planting a big kiss between my cheek and ear, until I put a stop to it by extending my hand out straight upon his approach for a handshake. He said, “You’re mean,” but, I countered that I was merely setting boundaries. Ah, setting boundaries…the name of the game for people like me, who have worked hard, and am still working diligently, on understanding the meaning of the word “enough.”

I will even sometimes initiate a friendship hug, when I have not seen a person in a while. I’ll tolerate a clinch here and there for a birthday or other special occasion. Even I am happy to give or receive a heartfelt hug during hard times. Friends who come to know the anti-hug thing about me, will jokingly give me a heads up before they plan to zero in on me with a cuddle. Yet, through all this, what is my first and foremost hobby? My passion in life? Dancing! And, I’m not just talking about genres like country-line dancing, hip hop, zumba or other forms of the art, where each person improvises or moves on their own! I’m talking sweat-mingling, eye-gazing, arm-locking, face-to-face, couples dancing.

I’ve wondered if it is merely ironic that a person who flinches at a friendly touch like me, doesn’t mind being man-handled at a dance. Or, is it a transference? Perhaps I was lured to the dance after the lack of warmth from a non-demonstrative father, followed by a decade in bow-centric Japan, then proceeding onto a parade of prudish partnerships after that.

Speaking of Japan, clearly anyone raised in or around Asian cultures will not find hugs or kisses comfort food at all. Once, when I taught a course in business English for some Japanese colleagues in the travel business, I set up a scenario where a typical hotel sales person came to the office, and instead of a bow or handshake, grabbed up one of the Japanese employees into a double-armed squeeze! We all laughed at the stark cultural divide. I have often wondered if my years in Japan really did influence me against the hug, or, if Japanese culture was so comfortable to me precisely because hugs and kisses were not part of the deal.

Since I am writing about hugs, I had my students write about hugs today, too. Some insisted that it was a weird topic. I saw that the absence or presence of hugs in a household in many cases had to do with culture; some students even wrote about being part of “hug-addicted” families. Most of the kids equated hugs with love and support. Many wrote that they didn’t get hugs (or kisses) any more now, since they were “too old for that already.” Some students wrote that they disliked being hugged due to their germophobia. For a handful of students, this subject brought up some feelings of abandonment. I hope that my journal-like writing assignment can be a reflective, healing, catharsis for them while they are young, so they are not still grappling with hug issues when they are my age.

I sometimes hear about people who can’t tolerate hugs, or even intimacy in general, because they had abusive, or just even aloof parents. Actual abuse aside, can non-demonstrative parents also create feelings of abandonment in children? Likewise, is the spouse or partner of a person who is not affectionate more likely to experience feelings of loneliness? Not being accustomed to the touch, I have sometimes expressed revulsion at seeing fathers hug their children, or when witnessing “PDAs” (public displays of affection)….then I found out it was me who was the exception instead of the norm!

In the U.S., right here in Culver City, in fact, I’ve come to realize that we inhabit a society where hugs are symbolic of salutation, support, and ultimately, affection. I am thinking about getting with the program already.