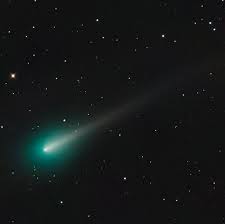 A comet that has caused a lot of excitement is racing toward a close encounter with the Sun on Thanksgiving Day. Comet ISON will pass about 700,000 miles above the Sun’s surface before whipping around and heading back toward deep space—if it survives. If it does, the comet might be visible to the unaided eye before dawn for a few weeks after the encounter.

While you’re there, you can also sign up to receive notices of upcoming sky-watching events.

An asteroid-hunting telescope, part of the International Scientific Optical Network (ISON) in Russia, discovered Comet C/2012 S1 (ISON) on September 21, 2012. Some comet-watchers quickly suggested that it could become as bright as a full Moon late this year. Continued observations, however, show that it’s not brightening as much as those early optimistic projections indicated.

The comet will get brighter as it approaches the Sun, but more difficult to see through the Sun’s glare. It will shine at its brightest as it passes the Sun, although it will be too close to the Sun at that time to view safely.

Like all comets, ISON is a big ball of frozen gases and water mixed with rocks and dust. This ball, the comet’s nucleus, appears to be about three miles wide—large, as comets go. As ISON approaches the Sun, the heat vaporizes some of the comet’s icy surface. That surrounds it with a cloud of gas and dust that can span a hundred thousand miles or more. The Sun’s radiation pressure pushes some of this material outward, away from the Sun, to form a glowing tail.

As ISON moves far enough from the Sun for us to see it in morning twilight in early December, it should be a pretty sight.

ISON will pass closest to Earth on December 26, at a distance of about 40 million miles. (The average Sun-Earth distance is roughly 93 million miles.)

ISON probably came from the Oort Cloud, a vast shell of icy bodies that extends out to a distance of approximately one light-year from the Sun—one-fourth of the distance to the nearest star, Alpha Centauri, which is 4 1/4 light-years away. The Oort Cloud bodies are leftover “building blocks” from the birth of the solar system, so they contain the same mixture of materials that gave birth to Earth and the other planets. Astronomers believe this is probably ISON’s first-ever trip to the Sun’s vicinity.

After a remarkable flare up in brightness on November 14, comet ISON became barely visible to the naked eye as it passed Earth on its journey toward the Sun. But the comet’s future is far from certain. NASA lists three possible options for what might happen: (1) the comet spontaneously breaks up sometime before Thanksgiving; (2) it is destroyed as it roasts in the Sun’s heat on Thanksgiving Day; or (3) it makes it away from the sun with a large tail of lost dust behind it. Spontaneous breakups are quite rare—they happen to less than 1 percent of comets—so one of the latter two options will likely come to pass over the next several weeks. Until then, expect more incredible photos of ISON to start surfacing—and keep looking up!