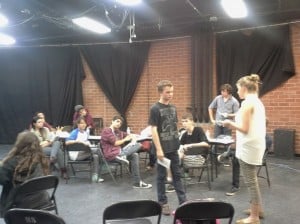 Culver City High School and AVPA’s Blurred Vision Theatre Company is proud to present its second weekend of Reginald Rose’s Twelve Angry Jurors. A “co-ed” adaptation of the well-known drama 12 Angry Men, the play follows the deliberations of a jury at a murder trial. A seemingly open and shut case slowly comes unravelled as the jury’s lone dissenter – played by Henry Fonda in the well-known film adaptation – holds steady in the face of opposition and works to gradually win others to his side. Reason and tempers are put to the test as the heat rises in the cramped jury room.
The subject matter, which has only gained more relevance with recent highly-charged court cases, affords the strong ensemble with numerous opportunities to demonstrate their dramatic skills. The cast is an intriguing combination of new and familiar faces in AVPA Theatre. Under the direction of
Jill Novick, the AVPA Creative Director for Theatre, the work and the actors are in good hands.

The production is scheduled to run November 14 to 16.
The play will be presented in the Sony Pictures Theater (aka the Black Box).
Tickets can be purchased by going to www.avpa.org