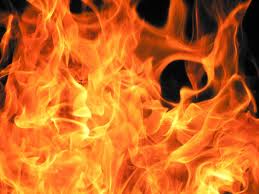 A small brush fire burning atop a hill in Culver City Monday afternoon was extinguished within an hour, authorities said.

The fire was reported shortly before noon in the 5600 block of Fairfax Avenue, according to the Los Angeles County Fire Department.

The blaze broke out near dozens of homes, but there were wide clearances between those homes and the area that is burning, according to aerial footage. No evacuations were ordered and there were no reports of injuries.

Oil equipment is set up in the hills where the fire was burning, according to NBC.