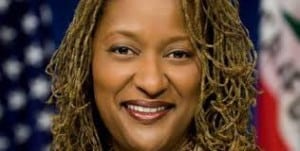 While there was never much doubt that Holly Mitchell would sweep to victory, most voters decided such a foregone conclusion wasn’t worth showing up for.

In front of a Senate chamber humming with friends, family members and a handful of fellow lawmakers, former Assemblywoman Holly J. Mitchell, D-Los Angeles, took the oath of office Thursday afternoon to represent the 26th Senate District, according to the Sacramento Bee.

Senate President Pro Tem Darrell Steinberg, D-Sacramento, lavished praise on the newest Democratic senator. “She has demonstrated over her years in the Legislature on the green carpet a tenacity, a purpose and a willingness to fight for the least among us,” Steinberg said, alluding to the green decorating the Assembly chambers. (The Senate’s is red.)

For her part, Mitchell fought back emotion as she vowed to focus on  working families and noted that her presence in the Senate marks a milestone.

“I will be the first black woman (to serve in the Senate) in over 10 years,” Mitchell said, “and I am going to wear that badge with honor.”

Democrats now control 28 seats in the Senate, one more than they need for the two-thirds majority that allows them to raise taxes, pass urgency measures or put constitutional amendments on the ballot without Republican assent.

While Crossroads is pleased to see the effective and affable Mitchell move to higher office, the amount of voters who put her there speaks to the apathy and disinterest of much of the district’s electorate.

The Official Election Canvass period began on Sept. 18 and ended on Sept. 27. During the Official Canvass, all outstanding provisional and Vote by Mail ballots were verified and tallied. The RR/CC also conducted a 1% Manual Audit.

The results were certified to the California Secretary of State today. On Oct. 1, the Board of Supervisors is tentatively scheduled to declare the election results official.