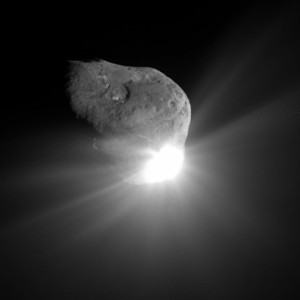 After almost 9 years in space that included an unprecedented July 4th impact and subsequent flyby of a comet, an additional comet flyby, and the return of approximately 500,000 images of celestial objects, NASA’s Deep Impact mission has ended.

The project team at JPL has reluctantly pronounced the mission at an end after being unable to communicate with the spacecraft for over a month. The last communication with the probe was Aug. 8. Deep Impact was history’s most traveled comet research mission, going about 4.7 billion miles.

“Deep Impact has been a fantastic, long-lasting spacecraft that has produced far more data than we had planned,” said Mike A’Hearn, the Deep Impact principal investigator at the University of Maryland in College Park. “It has revolutionized our understanding of comets and their activity.”

Deep Impact successfully completed its original bold mission of six months in 2005 to investigate both the surface and interior composition of a comet, and a subsequent extended mission of another comet flyby and observations of planets around other stars that lasted from July 2007 to December 2010. Since then, the spacecraft has been continually used as a space-borne planetary observatory to capture images and other scientific data on several targets of opportunity with its telescopes and instrumentation.

Launched in January 2005, the spacecraft first traveled about 268 million miles to the vicinity of comet Tempel 1. On July 3, 2005, the spacecraft deployed an impactor into the path of comet to essentially be run over by its nucleus on July 4. This caused material from below the comet’s surface to be blasted out into space where it could be examined by the telescopes and instrumentation of the flyby spacecraft. Sixteen days after that comet encounter, the Deep Impact team placed the spacecraft on a trajectory to fly back past Earth in late December 2007 to put it on course to encounter another comet, Hartley 2, in November 2010.

“Six months after launch, this spacecraft had already completed its planned mission to study comet Tempel 1,” said Tim Larson, project manager of Deep Impact at JPL. “But the science team kept finding interesting things to do, and through the ingenuity of our mission team and navigators and support of NASA’s Discovery Program, this spacecraft kept it up for more than eight years, producing amazing results all along the way.”

The spacecraft’s extended mission culminated in the successful flyby of comet Hartley 2 on Nov. 4, 2010. Along the way, it also observed six different stars to confirm the motion of planets orbiting them, and took images and data of the Earth, the Moon and Mars. These data helped to confirm the existence of water on the Moon, and attempted to confirm the methane signature in the atmosphere of Mars. One sequence of images is a breathtaking view of the Moon transiting across the face of Earth.

In January 2012, Deep Impact performed imaging and accessed the composition of distant comet C/2009 P1 (Garradd). It collected early images of comet ISON in June of this year.

After losing contact with the spacecraft last month, mission controllers spent several weeks trying to uplink commands to reactivate its onboard systems. Although the exact cause of the loss is not known, analysis has uncovered a potential problem with computer time tagging that could have led to loss of control for Deep Impact’s orientation.