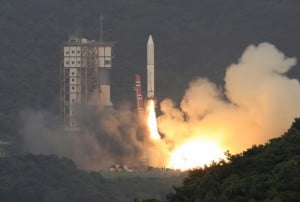 Japan Aerospace Exploration Agency (JAXA) launched their first Epsilon Launch Vehicle (Epsilon-1) with the Spectroscopic Planet Observatory for Recognition of Interaction of Atmosphere (SPRINT-A) onboard at 2:00 p.m. on September 14 from the Uchinoura Space Center.

An hour and 49 minutes after launch, deployment of its solar array paddles was confirmed, and the satellite is currently in good health.

The SPRINT-A’s nickname was also decided. It is “HISAKI.” The name was chosen for the following reasons:

(1) “Hisaki” is the name of a cape in the Uchinoura area. (The cape at the tip of the Tsushiro Peninsula.) It is the first brightened point by the rising sun in the Uchinoura area, thus the place is a symbol of a new day in Uchinoura. It is also a place for local fishermen to pray for safety hence it is a symbol of safe navigation for boats leaving Uchinoura. As it is a tip shape, it reminds us of the satellite configuration.

The launch was coordinated and controlled by two laptop computers from a nearby command center, and drew spectators both at the Kagoshima facility and at a public viewing location in Tokyo.

Over 900 space enthusiasts gathered to watch the liftoff in the Japanese capital, clapping and snapping cellphone photos as the 79-foot-long, 91 metric ton Epsilon-1 lifted off. The vehicle then successfully deployed SPRINT-A at an altitude of approximately 620 miles.

“The successful launch moved Japan a step closer to its goal of cashing in on the international satellite launch industry,” Reuters reporter Leika Kihara explained. “The rocket’s smaller size and a computer system that allows it to perform its own systems checks means it can be assembled quickly, enabling operators to cut personnel and equipment costs.”

In fact, JAXA officials told reporters that the Epsilon—the nation’s first new rocket design since the introduction of the H2A in 2001—costs about one-third as much as its predecessor, at 3.8 billion yen ($40 million). It is also half the size of the H2A (Japan’s previous major launch vehicle) and can be assembled and prepared for launch in just one week’s time.

“Japan hopes the rocket, launched with just two laptop computers in a pared-down command center, will become competitive in the global space business,” AFP noted. They also pointed out that a crew of just eight people are required to complete launch procedures, compared to a staff of 150 for the H2A.

“The small-sized rocket is equipped with artificial intelligence ‘for the first time in the world’ that allows autonomous launch checks by the rocket itself, JAXA has said,” the news agency continued, adding that the agency has described the SPINT-A payload it carries as “the world’s first space telescope for remote observation of planets including Venus, Mars and Jupiter from its orbit around Earth.”