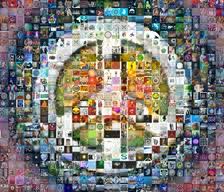 Please get your pen out and place an emphatic circle, oval, parallelogram, triangle, trapezoid or hexagon (or whatever shape strikes your imagination as distinctive) around September 21 and 22 on your calendar. The Whole 9 gallery (www.thewhole9.com) on Main Street will be producing an Affair of the Arts in downtown Culver City that weekend, an arts festival that, according to the gallery’s Heidi Huber, “will pick up where the wildly popular Culver City ArtWalk left off, feeding the creative souls of culture seekers in the Los Angeles area.”
The two-day festival, which will include live, eclectic music throughout that weekend by well-known musicians including Julia Fordham and Michelle Coltrane, will also provide an interactive children’s area. The event will showcase 50 painters, photographers, ceramists, glass artists and jewelry artists who have been selected by the gallery for this first-time festival. Popular food trucks will be available for snacks, and many of the city’s downtown establishments, including The Culver Hotel and Novecento, will offer specials to add to the enjoyment of those attending the festival.

At a Sneak Peek for the Affair, which was hosted by the gallery last Saturday night, one piece from each artist was displayed, exemplifying the high quality and appealing works that will be available at the forthcoming festival.
Several people strolling along Main Street were attracted by the unforgettable musical performance provided in front of the gallery by Marston Smith. Garbed in what looked like a mash-up between astronaut’s gear, armor and a hazmat suit, Smith, who has performed worldwide on a unique six-stringed electric cello that he designed, presented a visual appearance as unique as his music, well in keeping with the gallery’s goal to produce a highly creative and memorable event. Successfully enticing people to explore the Sneak Peek, at one point he sported headgear sprouting black and green tentacles above a clear plastic mask, and could have passed as the lovechild of Medusa and a spaceman.
Upon entering the gallery I was immediately captivated by a striking silvery sculpture powerfully depicting an abstract female torso with its sleek, simple, elegant lines and seductively shimmering surface. The artist, James Hill, who works with steel, stainless steel and bronze, has the ability to transform these “cold” materials into dynamic, living pieces that radiate vibrancy. This one was certainly a prime example, and it was right at home in the company of the intriguing samples provided by the other gifted exhibitors.
Hill said this was his first venture with the gallery although he had exhibited in many other shows, including the one in Beverly Hills this recent spring. “Lisa (Lisa Schultz, founder of The Whole 9) saw me there,” he said. “We had met a couple of times in previous years.” He is looking forward to exhibiting at Affair of the Arts, commenting that “it is surprisingly well-organized,” given the relatively short period of time that has transpired since the concept took root.
Schultz confirmed that she received approval from the city as recently as July 2, and praised the excellent efforts of all involved in enabling the festival to come together so quickly, particularly because timing is a key factor in this event.
“We are perfectly positioned for this because of our relationships with artists as well as the relationships we’ve established with businesses in downtown Culver City,” she said. “Basically, we recognized the need and have the resources to fulfill it. And since Saturday, September 21 is World Peace Day, it was important for Affair of the Arts to take place on that weekend. Everything we do is about building community and creating change through art. A portion of the proceeds will go to the Peace Project, with a great many of the artists also donating to their favorite charities or causes.”
The Peace Project (www.thepeaceproject.com) is a non-profit that The Whole 9 founded in 2010 to create sustainable peace in communities around the world and prove that great change can come about very quickly if creative people work together. It has distributed 10,000 pairs of crutches across Sierra Leone, changing the lives of thousands of people instantly. That country’s ten-year civil war caused massive devastation with deaths, casualties that included 20% of the world’s amputees, and the destruction of much of its infrastructure.

But distribution of the crutches was only the first step.

It was discovered that within one month of use, regular rubber tips wear out, traction and shock absorption is lost, accidents occur, structural pain sets in, and rapid degradation of the crutches takes place. Accordingly, Peace Tips is one of the initiatives currently being worked on by The Peace Project. It aspires to deliver specially formulated crutch tips to one million disabled people in post-conflict countries and help them lead more productive, less painful lives. The tips, which have a life expectancy of over a year, leave a peace sign imprint on soft ground, transforming war victims into messengers of peace as they move forward.
Going back to the first sentence of this article, in case you’re curious, I scribbled a heart shape over those dates because I loved what I saw as well as the motivations guiding the gallery’s efforts. Shopping with a conscience – now, that’s a captivating combination, and based on the appealing selection presented Saturday night, the festival later this month is sure to satisfy a variety of tastes. If the intent was to whet the appetite, it worked very well. Bring on the buffet!