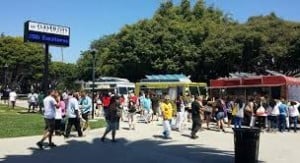 The seats were filled at the Garden Room of the Vets Building on Tuesday, Sept. 3, and the conversations were soft-spoken. While the September heat filtered through the crowd, cool heads were in evidence, and the hot topic of school facilities was addressed in depth.

School Board President Kathy Paspalis called the meeting to order, and turned it over to Superintendent Dave LaRose.

“What are the next steps?” La Rose began, easily sweeping past the previous weeks of controversy and stepping forward to face the future. “What are the things that we have learned here? While we have had to reorganize, this conversation is not over. Nothing could be further from the truth, so what is the framework?”

Offering to open the floor to comments after the presentation, he continued, “There were a number of legitimate questions, and we want to be responsive – not from a persuasive point of view – but let us address and process and quantify just the facts, on the parcel tax, on the needs assessment, on the bond measure; we need a master facilities plan, regardless of how we pursue it.”

Turing the floor over to Gil Fullen, vice president of Beatty Balfour, the construction company that has done the athletic field and other projects in the capital improvements campaign, the workshop went into slide mode.

Awkwardly, the information presented was unreadable, full pages packed with details that the audience could barely decipher. While letting the audience know that this information would be online at the district site, it was still difficult to use the presentation and a few sentences from each page had to suffice for the complete details.  Fullen was gracious about answering questions, and the audience had some well aimed inquiries.

School Board candidate Steve Levin asked about prioritizing needs, with safety issues taking precedence over cosmetic concerns, and Fullen noted that the categories of safety and security had been given top status.

With $850,000 of capital improvements currently underway at the schools, the concerns regard the Americans with Disabilities Act (ADA) and post-Newton security challenges were brought up, but the bottom line continued to come back to the bottom line; how much money?

A parcel tax and bond overview was presented by consultants Chris Everett and Chet Wang. Reporting on Culver City’s previous bond, Measure T, a $40 million borrowing that passed in 1996, the news was positive. Owing to a refinance made by the district, the $97 million once owed was now down to only $33 million, and the debt was expected to be paid off by 2038.

Everett and Wang also noted that of the 106 school districts that put a bond on the ballot in the last election, 91 of the measures had passed. Of the district that voted on a parcel tax and a bond on the same ballot, three out of four passed.

Culver City’s maximum allowable bond request would top out at $169 million, in keeping with the current assessed values, costing property owners $300 per year.

The April 2014 City Council race will be the next election that the bond could be placed on the ballot.

Please visit the District’s website at www.ccusd.org and look under News and Announcements to find presentations regarding Balfour Construction’s CCUSD Work Priority Cost Study, a Bond and Parcel Tax Overview and updates to the District’s on-going capital projects.

In addition, videos of the workshop are available by clicking here.