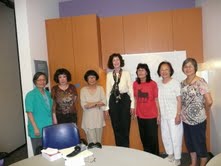 There’s a saying attributed to H. Jackson Brown, Jr., an American author best known for “Life’s Little Instruction Book”: “Never make fun of someone who speaks broken English. It means they know another language.” And that language may use a completely different alphabet, have different rules of grammar, and contain sounds not found in English while omitting others common to English. Oh, my . . .
English, with its wide and confusing variety of dialects, idioms, roots, rules and exceptions, is indeed a mixed bag, and those who lack fluency in it may well be unfamiliar with that expression. Enter Liz Cohen who, fearing that foreign-born seniors might find themselves up the river without a paddle as they attempt to navigate the shoals and depths of our national language, recently created a Conversational English group at the Culver City Senior Center in order to provide a safe, nonjudgmental environment in which fluency could flow.
As a young child and high school student Cohen, who was and continues to be enamored of books, thought about being an English teacher. “I’m a reader,” she said, “and love to hear about books others are reading and love to go to the library.” She occasionally feels “a bit hopeless since I don’t think I’ll be able to read all the books in the library, but I’m trying.” In college she considered becoming a psychologist, but didn’t pursue that path. After working in various offices she found her niche as an escrow officer, a career that lasted over 35 years.
“Certainly it was important in the escrow world to write and speak clearly and in such a way that nothing could be misinterpreted,” Cohen said. Her ability to speak clearly and extemporaneously also led her, at one point, to a position on the board of the Los Angeles Escrow Association.

She enjoys a busy retirement. In addition to volunteering at the senior center as facilitator of the Conversational English group, she exercises her communication skills as a site docent at the Getty Center, leading architecture and garden tours, as distinguished from the gallery docents, who lead tours of the collection.

The senior center group originated because a couple of experiences led Cohen to think about those whose first language is other than English, and how many roadblocks they may encounter that hinder their ability to practice speaking English.
“Our housekeeper, who has done an amazing job for us every two weeks for over 30 years, mentioned that she likes to talk to me as it gives her an opportunity to speak English, and she doesn’t have many chances to do that,” she said. “Then a friend mentioned that she was swapping services with an Asian immigrant, teaching her correct English pronunciation in exchange for acupressure treatments.
“Often people for whom English is a second language live with people who speak their first language, have friends and other relatives who speak their first language, shop in places where they can speak their first language and so on. That’s what led me to the idea of creating a place for this practice, and the Culver City Senior Center was open to it, indeed encouraging of the idea.”
And so the group which, Cohen emphasizes, is not a class and is only referred to as such for convenience, was born, with weekly meetings that start at 9:30 A.M. each Thursday and last an hour.
“Occasionally someone comes once and doesn’t return, as it may not suit that person’s needs,” Cohen said. “However, many of the participants have come to all the sessions since we began in mid June. Generally a class is composed of 8 to 10 people, but we always have room for more, and welcome new attendees.”
Many nationalities are represented.

”We have had attendees speaking Thai, Japanese, Korean, Chinese, Spanish, Bulgarian, Russian, Hebrew, and probably more,” she said. “I like to think that it’s a wonderful representation of what used to be called the ‘melting pot’ and which I enjoy referring to as a ‘U.S. salad.’”
Adding that “we don’t get into grammar, or anything much except conversing,” Cohen said she generally proposes a topic to encourage discussion.

“I often ask questions,” she explained. “What special thing did you do this week? What kind of place do you live in – house, apartment, or other? Tell me about your neighbors. Will you take a trip this year, or have you already done so? If you did, or will, tell me how you chose that place. If not, where would you like to go? What did you read or hear this past week, in English, that didn’t make sense? The room contains a board so that I can write words which may be confusing, and we can clarify and explain and expound.”
Cohen never knows in advance who or how many will attend, although “conversations are often interesting and always lively.” She described the sessions as very informal meetings for conversation where “we just sit around and talk, and talk, and talk, and in this way I hope that the attendees will use the practice to increase their English fluency. There is no obligation for anyone to speak, but much encouragement.” She smiled as she recalled when “one attendee told us she was on a seafood diet. She explained that when she sees food, she eats it – a wonderful play on words and a lesson about English.”
Present on Aug. 29 were Natrudee, Kitty, Yong, Zhuzha, Dee and Kyoko, shown flanking Cohen in the accompanying photo. The hour flew by with discussions that included the difference between certain words that sound alike, the incorrect tendency to use “should of” instead of “should have,” the use of various abbreviations (LOL, IMO, etc.) that have sprung up through e-mail, and the sharing of individual experiences.
Cohen described her travel adventure that week, having gone on a two-hour drive with her husband to a restaurant in San Gabriel, where they celebrated his birthday with a messy but delicious lobster dinner. Her dining experience elicited several comments from the group. The writer’s memory of a childhood incident involving language and a teacher who lacked compassion and patience also evoked several responses, including considerable praise from the group for Cohen’s gentle and effective contrasting approach. One woman’s heartfelt words were simple but eloquent: “She is so important to us. I honor her.”
An attendee told of the “homework” assignment given each week, in which they are requested to find opportunities to practice speaking English for an hour. The time spent with grandchildren is valuable for many reasons, according to another attendee, not the least of which is that it gives her a chance to help fill that assignment since “they only speak English with me.”
English is fraught with challenges, as one attendee discovered when a neighbor asked her to pick up a container of Knudsen cottage cheese at the market. “Why is this Knudsen with a ‘K’?” she asked, laughing, as she described her on-site learning experience. “I thought it was with an ‘N’ and I looked all over and couldn’t find it.”
All too often, few opportunities for formal schooling in English are available to immigrants who have other pressing priorities eating up their time, such as making a living and/or raising their children, causing misunderstandings like the Knudsen incident to be frustrating and all too frequent. But there are things those in contact with foreign-born people can do to make communication easier.
“People talk so fast, it’s hard to understand,” said one attendee. “I can’t hear so fast.” “And when you don’t understand, they talk louder,” said another. “So impatient.” Some told of having lost confidence because of their lack of language skills, and the vital role Cohen played in boosting that confidence. One attendee said her own anger at her inability to communicate also drove her to improve.
Cohen shared her personal opinion that “people who have been born in other countries and who have traveled and are living here are brave and strong. For most of us, just moving to a different place in the same city or to a different city is traumatic, so imagine moving across the globe. I think of the attendees as ‘heroes’ since they have crossed a good portion of the planet to come to the United States, and have had to learn a second or third language. This is heroic behavior indeed. Fortunately, they do get some particular mental benefits from this, as recognized by the scientific community. When one speaks more than one language, one stays alert longer and has better mental skills, power and ability to handle difficult situations, so I take from this thinking that the people who come to this group to practice their English are courageous and bright.”
At the risk of drowning the reader in maritime metaphors, those who have difficulty communicating may find themselves dead in the water, so kudos to Cohen for captaining her grateful passengers to a safe harbor and providing them with a very useful weekly shakedown cruise. Fluency ahoy!