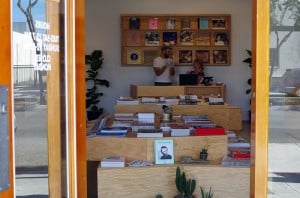 Zines and independent publishing are having a very special moment according to Los Angeles, I’m Yours –  Not only have zines gotten so big that there are festivals dedicated to them, more and more bookstores are dedicating portions of their stores to these little books. There has yet to be a notable jump in a store from books to zines and it was only a matter of time before someone did it right. Well, that time has come because newly opened & Pens Press in Culver City has successfully made a magazine, zine, mini-book, and regular book destination.

Located on Washington between the bustling gallery row and the delicious Lukshon/Father’s Office/Helm’s Bakery compound, the store is a very discrete white brick building. There’s a hand painted sign above the entrance announcing its presence, a homemade detail that pops up throughout the store from the open/closed sign to the new sandwich board being painted as we walked up. It feels uniquely homey in a part of town that is often only considered a thoroughfare.

It’s a bright, woody space too. Designed by Andrew Berg of General Store, the store features handmade wooden display shelves that go beyond only being display tables and morph into these wonderfully strange and multi-leveled shelves, storage units, bins, etc. They’re can do a little bit of everything. Their interesting shapes help to transform the shop into a modern, simple, and sophisticated place whose beauty is in the cleanliness of presentation and selection.

Stocking local zines like RRR to art books by Steven Harrington and to Miranda July’s It Chooses You, there is a very local presence to the very new store. There are fancy and obscure magazines like The Travel Almanac and I <3 Fake, silly modern graphic novels like Lis Hanawalt’s My Dirty Dumb Eyes, fancy, alternative DIY books like GROW, and even a few good looking reads for kids like Mel Kadel’s It Rained All Day and Jason Jagel and Brian McMullen’s Hang Glider & Mud Mask. There’s something for everyone here and those somethings are all extremely good looking and presented in a calm, cool way.

The new store’s being so pretty and confident in its selection and build out is not surprising considering the store is the sister of San Francisco’s decade old Needles & Pens. The store comes from recent transplants Andrew Michael Scott and Michelle Blade and they’re hoping to fold themselves into the creativity of the neighborhood as soon as possible by holding events and shows in their back-of-the-store gallery space. (Note: They have two upcoming events, September 7th’s SFAQ release party and September 14th’s book release and exhibition for David King’s Secret Origins Of The CRASS Symbol, a book recently published by & Pens Press.) The space is inviting and sunny and is going to be your new zine destination before you know it. Being in there you can already feel the spirit of anxious zinesters wanting to make pilgrimages to show off their newest creations. There is no shortage of independent bookmakers in Los Angeles—and & Pens Press is hoping to showcase them.

Here’s to another beautiful Culver City bookstore! Go buy something!