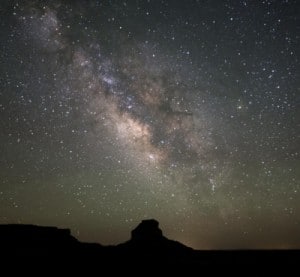 The 34,000-acre Chaco Culture National Historical Park is home to many ancient wonders including the remains of a civilization that thrived over 1,000 years ago. The park, which has been protecting its archaeological riches since it was established in 1907, is now protecting its views of the starry skies too. It has just been named as the International Dark-Sky Association’s newest Dark Sky Park.

“Once the night sky was something that was very much a part of the human experience at Chaco and around the globe,” says IDA Executive Director Bob Parks. “We are delighted that Chaco is now preserving the nighttime environment alongside their historic treasures.”

As a Gold-tier IDA Dark Sky Park, Chaco has shown its commitment to preserving its near-pristine night skies. The park has adopted a set of strict lighting guidelines that include the use of dark-sky friendly lighting now and in the future, ensuring that it will do its part to keep the nighttime environment natural and unspoiled for generations to come.

The park is also exemplary in its public outreach efforts, holding numerous educational programs and events. Upcoming will be the Chaco Canyon Star Party on October 5 that will include a formal public dedication of their new IDA Dark Sky Park designation. The event will feature guest speakers, dark sky preservation messaging, and special interpretive programs, along with stargazing opportunities throughout the evenings. A commemorative poster will be given away to visitors during the event.

Chaco Culture National Historic Park superintendent Larry Turk feels strongly about the designation. “Standing at one of the park’s 4,000 prehistoric archeological sites, one can easily imagine another human centuries earlier gazing awestruck into the same universe while surrounded by ecosystems that have adapted to the natural rhythms of the moon and stars,” said Turk.

MEANWHILE, CLOSER TO HOME, stellar viewing is also available at Mount Wilson Observatory, located in the San Gabriel Mountains just above Sierra Madre. The Observatory is open to the public daily from 10 am to 5 pm, March 30 through December 1. On weekends, you can have lunch at the Cosmic Cafe, open 10 am to 4 pm Saturdays and Sundays, and then take a 1 pm Guided Tour that includes entry onto the observing floor of the 100-inch Telescope. At other times, including the winter months, you can arrange for a Special Tour.

And for a once-in-a-lifetime adventure, your group can also reserve an evening on Mount Wilson’s historic 60-inch telescope, which still has nights available during the 2013 season. The views of planets, star clusters, nebulae, and galaxies through the 60 inch, among the largest telescopes in the world accessible to the public, are unforgettable. For more information: www.mtwilson.edu.