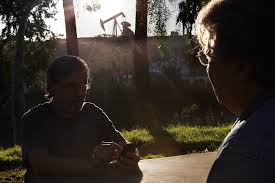 When it comes to topics that could be described as explosive, fracking fits the bill in a figurative sense and, as its opponents declare, in a literal one as well.

Paul Ferrazzi, Executive Director of Citizens Coalition for a Safe Community was invited to address a meeting at Lakeside Villas on Aug. 22 with an opportunity to make a presentation. Ferrazzi also holds the Culver City seat on the Community Advisory Panel of the Baldwin Hills Community Standards District.

On the website of Citizens Coalition for a Safe Community, www.ccfasc.org, hydraulic fracturing (“fracking”) is described as “a process in which dangerous chemicals are mixed with enormous amounts of water, polymers and sand, are injected thousands of feet underground at pressures high enough to cause seismic explosions and create and prop open fissures in the sediment. This allows oil and natural gas to more easily escape and flow out of the strata to the producing wells.”

CCFASC was organized in 2008, resulting from a grassroots community movement
to protect the environmental health and safety of the residents of Los Angeles County.

Although fracking has been utilized for decades, CCFASC is concerned about the different techniques developed by Halliburton and Schulmberger over the past few years, techniques which it states are extensively used in almost all of today’s natural gas extractions.

Bruce and Carrie Anders, residents of Lakeside Villas in Culver City, had also been concerned about fracking for several years. They learned about its use locally when they were participants at the West LA College seminar on fracking this past spring, leading them to commit to local involvement.

“We intend to continue to advocate for a ban or moratorium on this highly destructive and dangerous oil drilling practice,” they said. “We support our Culver City Vice Mayor Meghan Sahli-Wells, who has taken an active position in advocating for a moratorium on fracking in Culver City, pending regulations that insure public health and safety. We also support statewide and nationwide groups who oppose hydraulic fracking.”

They elaborated that “the oil company owners of the Inglewood oil field plan to drill many new wells and frack many of the existing wells. Fracking digs horizontally below our residences, raising and lowering the ground and causing serious cracks in cement and masonry. The process uses highly toxic chemicals under great pressure and has the likely potential to poison ground water, release toxic gases such as methane, hydrogen sulfide and benzene, to name only three. Fracking can disturb the delicate geology of the Inglewood earthquake fault. New York State has banned the process because of its dangers. Many areas in Pennsylvania and Colorado have experienced the negative effects of fracking, including tap water so filled with gases that it lights on fire, residents with extreme breathing problems, and geological disturbances.”

Their concern for the health and safety of their community led, on Aug. 22, to their hosting a meeting in their clubhouse featuring Ferrazzi,

That clubhouse became the site of a brief pop-up crash course in fracking, with a great deal of information presented in the form of handouts, slides and videos involving past and potential hazards. These included the Baldwin Hills Dam collapse in 1963 resulting in five deaths and $12 million in property damage; the explosion at the Ross store in the Fairfax area in 1985, with 23 people injured and street-side flames that burned into the next day; the accidental toxic gas release at Inglewood in 2006 that hung over the Culver Crest neighborhood for 36 hours; the leaking abandoned well in Culver City at the dog park; and millions of cubic feet of methane leaking into the atmosphere at the University City Syndicate well in the man-made lagoon in Playa Vista.

In an interview subsequent to the meeting Ferrazzi emphasized and amplified some of his concerns.
“As the potential threat of the rapid expansion by Freeport-McMoRan Oil & Gas of the Culver City parcel of the Inglewood oil field looms over us, Culver City residents should be made aware that the plans include drilling 100 new oil wells by 2028,” he said. “Many of these would be drilled under Ballona Creek ending at a depth of 10,000 feet to about a mile into and under residential neighborhoods in our city.”
The consequences he described were ominous.
“If this extraction of oil and gas under our city is allowed to move forward,” Ferrazzi warned, “we will see the following partial list of the most immediate negative impacts, some of which are already existing from current operations that will be exacerbated: increases in ground movement (uplift and subsidence) and fault slippage resulting in possible structural damage and city subterranean infrastructure damages. This type of damage is already seen in the oil field adjacent neighborhoods where directional drilling and water-flooding have been used for decades. The rupture and destruction in 1963 of the Baldwin Hills Dam was attributed to this kind of ground movement caused by enhanced recovery.”
He referred to increases in exposure to toxic oil field gases and associated negative health impacts to both children and adults realized through operational point sources such as valves, hatches, fixtures, couplings, etc., adding that these types of toxic emission sources are modeled and reported annually by the operator to the Air Quality Management District. Other source types of releases include those occurring through operational equipment failures or drilling events, leaking idle and abandoned wells, improper storage of contaminated soil, and migration from oil reservoir depth through existing geological faults and fractures to the surface.
Ferrazzi foresees devaluation of residential and commercial property as a result of title insurance companies, homeowners’ insurance companies, mortgage lenders and banks recognizing negatives in neighborhoods that are seeing fracking and other types of well completion used to exploit deeper tight oil formations. “Most families’ most significant investment is their home,” he said. “Is it fair to have it devalued by a heavy industrial operation being allowed to take place simply because it is subsurface?”
Stating that “oil and gas extraction cannot be made good neighbors simply by virtue of their donations to local charitable organizations and identified as such by the corporation as a community benefit,” he added that “the hazards of oil and gas extraction far outweigh any benefit of cash donations. The industry and its hired shills will repeat the mantra over and over that ‘it is safe, it is safe’ to the public, while identifying to their investors and the SEC in its 10K filings that it is anything but and includes increased risks which they do not carry liability insurance for.”
Ferrazzi was emphatic that “the only real action that should be taken by the legislature and the governor this year should be the passage of a moratorium on hydraulic fracturing until it can be determined to be safe without harm to the citizens and environment of California. The majority of this legislature, seemingly captured by the industry, does not seem to recognize their responsibility of “Duty of Care” that they are mandated to uphold.”
Aesop’s fable, “The Bundle of Sticks,” is the origin of the saying, “In union there is strength.” And that concept clearly came through in Ferrazzi’s response when asked what action he recommends individual citizens to pursue.
“It is time,” he said, “for Culver City residents, as a Charter City, to consider exploring and embracing the idea of a Community Rights-based ballot initiative or ordinance to protect our rights to clean air, clean water and a healthy and safe environment for our families and a sustainable municipality against the Goliath of the fossil fuel industry, hell bent on extracting every last drop of oil to the detriment of the city and the planet and to the benefit of only their corporate bottom line.”
Julien R., a petroleum engineer who resides at Lakeside Villas and attended the meeting, offered an alternative perspective, mentioning two websites that each paint a dramatically different picture: www.inglewoodoilfield.com (PXP aka Freeport-McMoRan’s website about the Inglewood oil field); and www.baldwinhillsoilwatch.org (community group opposed to Inglewood oil field activities).
He also shared a third website, www.fracfocus.org, describing it as one where companies voluntarily disclose the chemicals used during fracturing treatments. “In fact, I was quickly able to find two wells in the Inglewood field on that website,” he said.
“There are many valid concerns about the hydraulic fracturing process and before I delve further into the topic, I truly believe that we can produce oil and gas safely and ethically,” he maintained. “I believe that oil field activities, including hydraulic fracturing, can be done without harming anyone. After all, the people who work in the industry are your neighbors and community members too. Any harm to the community is harm to us all.

”There are groups who believe that all oil and gas activities are fundamentally harmful. These people would like to see the industry cease all activities, not just the ones that involve ‘fracking.’ I am proud to say that I am a petroleum engineer. I help provide the world with energy. From the food we eat, to the clothes we wear, oil and gas make our lifestyles possible. It’s not just the cars we drive.”
He mentioned that although some of the arguments against fracking are that it causes earthquakes, pollutes groundwater and can cause illness, “in October of 2012 the results of an independent study commissioned by PXP were released. This document is available to the public and can be found at the www.inglewoodoilfield.com website. This study monitored seismicity, tested groundwater, measured subsidence, and explored the effects on community health. Anti-fracking groups immediately dismiss this as propaganda, but I urge anyone who is interested in this topic to read it and draw their own conclusions.”
Adding that there were numerous other studies, he stated that “one in particular I would like to quote is from the British Columbia Oil and Gas Commission: ‘In undertaking the investigation, the Commission notes that more than 8,000 high-volume hydraulic fracturing completions have been performed in northeast British Columbia with no associated anomalous seismicity. None of the NRCan (Natural Resources Canada) reported events caused any injury, property damage or posed any risk to public safety or the environment.’
“I understand the fears and concerns of the community. In no way am I trying to dismiss those concerns. Oil and gas activities are technical and complex. The reason why I have not delved more specifically into them is purely for the sake of brevity. I hope that some of the resources I have shared can help people make a more informed and balanced decision. Ultimately, though, I believe that oil and gas activities, including hydraulic fracturing, can be conducted in a safe and ethical manner that does no harm to the community.”

To frack or not to frack, that is the question, and two opposing viewpoints have been presented. Now what?

Some websites have been set forth in this article to assist those interested in further exploring the pros and cons of fracking. As resources go, the Internet is a well that will never run dry, perpetually pumping out information, so here’s the drill for those curious and/or concerned enough to devote some time and energy investigating this issue: Boot up, fuel your mind by reviewing those websites and others you come across, analyze, compare, and educate yourself. You may then be spurred to work toward preventive measures or you may find yourself reassured regarding the safety of hydraulic fracking. Either way, knowledge is power. 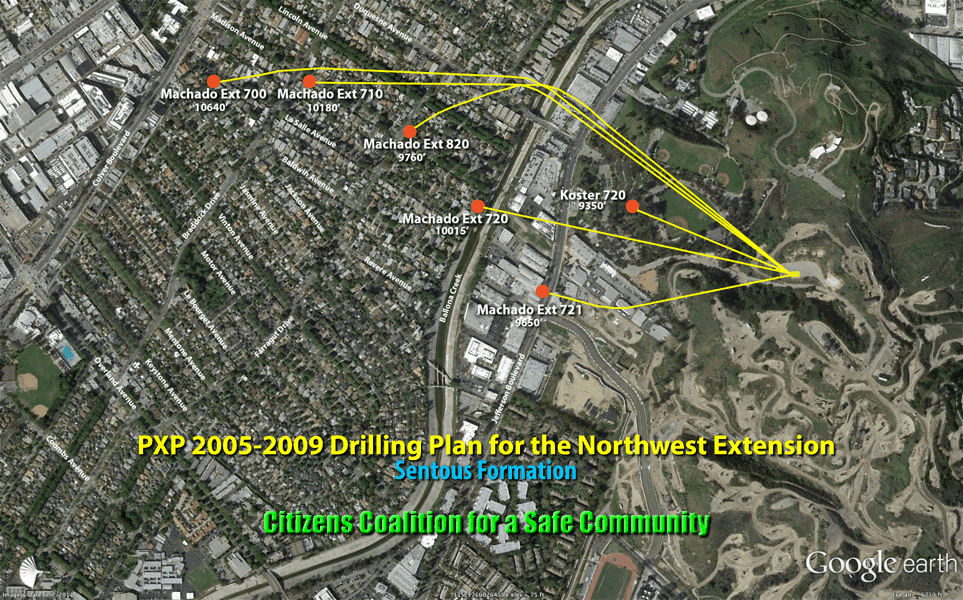