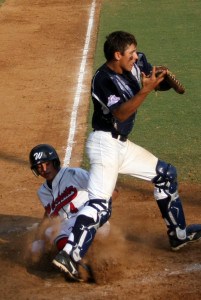 The Westchester Babe Ruth 13-15 year old All Star team continued their winning ways in Virginia to earn the number one seed in the championship round of the Babe Ruth World Series being played in Loudoun County, VA. The team has used a formula of strong pitching, stingy defense and timely hitting to move their record to 3-1 in pool play.

On Tuesday, Westchester outlasted the Southern Region champions from Brazoswood, TX , 2-0. Carlos Jacobo (Hawthorne ’17) won Game MVP honors for the second time in the World Series working a complete game shut out on the mound allowing 5 hits, 3 walks and striking out 7.

Westchester scored all of its runs in the first inning. Uly Perez (Santa Monica ’16) singled to start the inning. Hot hitting Matthew Kanfer (LACES ’15) sent a towering triple to center-field to score Perez. Kanfer would later come around to score on a ground ball by Lawrence Gilliam (Crossroads ’15). That would conclude the scoring for the game.

The Westchester defense turned 2 double plays behind Jacobo with the steady handed double play combination of Perez at shortstop, Crisitan Amador (Culver City ’15) at second base, and Grant Craddolph (Westchester ’15) at first base. Cameren Landreth (Westchester ’16) continues to lead the team in on base percentage at .875.

On Wednesday night, needing a win to secure the number one seed in the championship round, Westchester wasted no time scoring 9 runs in the first inning against the Virginia State Champions from Vienna, VA. Westchester needed to win the game and allow less than 5 runs to secure the top seed.

After first inning singles by Perez and Kanfer, catcher, Anthony Chavez (St. Bernard ’15), sent a 345 foot blast over the center fielder’s head to score Perez and Kanfer. Gilliam walked and AJ Inatsugu (Santa Monica ’16) laid down an exquisite push bunt single. Jacobo stepped to the plate and singled in Gilliam and Inatsugu. The rally continued when starting pitcher, Cameren Landreth, was hit by a pitch and Nick Goff (Loyola ’16) reached on error. After a walk by Perez, Kanfer punctuated the inning with a screaming fly ball triple to center field to clear the bases.

The game was suspended due to lightning for an hour after an inning and a half of play. When play resumed, pitcher Reggie Castro (St. Bernard ’15) took the mound and worked 4 2/3 innings of shutout baseball collecting 7 strikeouts along the way.

Westchester was able to close the game early – forcing a mercy run rule victory in 5 innings. Mario Morales (El Segundo ’16) contributed a base hit and 2 RBIs to aid the cause. Isaiah Cepeda and Grant Craddolph made standout defensive plays in the field to seal the victory.