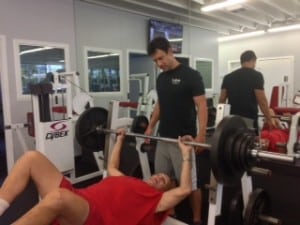 It has been said that the only exercise some people get is jumping to conclusions, running down others, side-stepping responsibility and pushing their luck.

Not in Steve Zim’s world

Believing that if the brain buys in, the body follows, A Tighter U, Zim’s unique fitness studio at 10854 Washington Blvd. in Culver City, replaces “impossible” with “ZIMpossible” by guiding clients to attain realistic lifelong fitness goals in a safe training environment. A customized, integrated approach is used, encompassing nutrition, weights and aerobics with a staff that includes a certified nutritionist, qualified massage therapist, experienced chiropractors and motivational trainers, as more fully described in www.ATighterU.com.

Zim graduated from Boston College with a major in Romance Languages and a minor in Science. His fluency in fitness has certainly brought him international acclaim and his knowledge of science came into play when, after observing experiments with advanced infrared imaging, he was able to develop more effective exercise techniques to maximize muscular density, strength and efficiency within a shorter period of time.

His fitness career, which includes celebrity clients such as actors, professional athletes and Olympic athletes, has made gigantic strides since its somewhat humble beginnings.

“After graduating I came out here and worked at a variety of things, including handing out towels at a private gym that was at Motor and Venice,” Zim said. The good study habits this recent college student had developed stood him in good stead in 1989 when “I got the study guide and studied on my own to take the exam to be a certified trainer, a four-hour exam as I recall.” He passed it on the first go, his career as a professional trainer immediately commenced and he’s been working in Culver City since 1992, with his studio at its present location for the past 15 years.

In 2000 his first book, “Hot Point Fitness,” was published. “It went to No.1 in the world in fitness publications,” Zim said, “and it was the No. 2 overall bestseller for Amazon. I started being invited to TV talk shows, and for ten years I was the weekend fitness expert for the Today show in New York, flying between LA and New York every couple of weeks to film the segments.”

Clients range from teenagers to seniors, and Zim grinned as he recalled a young man who came to work out in advance of his Bar Mitzvah “because he wanted to look really good – and he was very motivated by the presence of the pretty trainers to work hard and really do well.”

Conversely, Zim stated that “the biggest percentage gains in strength are made by people over 65. And it’s very expensive not to be in shape, because you can end up in a nursing home. People with poor balance can break a hip, which is very dangerous when you’re older as the lack of mobility contributes to your system shutting down, and then it’s over.

“You don’t want to be on a bell curve of fitness where you peak at a younger age and decline rapidly as you age. You want to reach and sustain a high point and keep it well into your later years, with any decline being very gradual so that the level of strength you’ve reached can stay with you and benefit you.”

While he believes in working within the client’s limitations, he also believes in “pushing the envelope a little bit, and a little bit . . . This is not a sprint but a marathon. We’ll get you to more than you want but less than what will hurt you. If you want to do two, we’ll get you to three. Working out isn’t random, it has an order. And the key is to change the order constantly, keeping the muscles guessing but at the same time protecting the client from injury.”

Injuries can easily occur when working with trainers who are not seasoned, and Zim said that many trainers lack that quality. However, the trainers at A Tighter U are required to go through several months of special tutoring before working with clients. “I can’t teach experience, but since I already have the experience I can teach them what not to do as they gain their own experience,” he said.

When exercising, he encourages people to remember three important cautions: focus your mind on the exercise you are doing in order to do it properly; breathe during weight training by exhaling when driving the weight and inhaling during the negative motion; and stretch between sets to remain flexible and help prevent injuries..

He mentioned that “a lot of people fear going to a gym, fear lifting weights. Here we have weights that start at half a pound. We have the lowest all the way up because everybody has a different starting point. No one should be afraid to walk into this gym.”

One of those who walked in eight months ago on a whim while strolling by was David Klein, a man in his 60s whom Zim described as “exceptional.” He has had more than his share of physical trauma, having suffered a motorcycle accident several years ago, causing him to have his leg in traction for four months. And two years ago he had lower back surgery.

Klein, for whom Zim designed a series of exercises to address his specific leg and back issues, was tired of walking bent over and hoped to correct his distorted posture. He had gone for physical therapy, but that had not helped. Now, seeing him walk easily from one machine to another, that problem appears to have been solved. Zim was emphatic about the role of good posture. “If you’re looking down, that’s where you’re headed,” he said. “You can make all the muscles you want but if your posture is bad, you’ll never look good. Balance is much better when standing straight.”

Klein said that when he was much younger he used to bench press, and had reached approximately 220 pounds when he was around 35. “Bench press is the king of upper body exercise,” Zim declared. “It’s all about focusing.” During this interview Klein, who started at 90 pounds a few months ago, achieved a new personal best of 225. “I recently saw my doctor,” he proudly stated, “and he said I was in better shape than 99.9% of the patients.”

Klein, who attends A Tighter U three times a week, is pictured in the accompanying photograph doing bench presses, with Zim standing behind him. “Steve makes the workouts enjoyable,” he said. “This is the Cheers of gyms.” Zim added that “one night around 8 p.m. there were 40 people in the gym and Neil Diamond came on with Sweet Caroline, and just like that, everybody started singing. It’s like a real community here; everyone is supportive of everyone else.”

That afternoon Judy Cohen, who started going to at A Tighter U about two years ago, stopped by for her session. She had worked out with various trainers at another well known gym “for a few decades, but they decided to quit giving us older people the ‘Young at Heart’ discount, which would have made the training much more expensive. We had a friend who recommended A Tighter U, so we checked it out. Steve was very helpful and the trainer costs me about half and I don’t have to be a member to use their trainer. My trainer, Rachel Katz, has been exceptional.”

Cohen’s goal was “to keep my muscles working so I could keep active. I also dance and walk but the training gives me upper body strength which I didn’t have at first. Now, at work I can easily move 30-pound boxes of books when I need to. My trainer also talks to me while we work out, so I get insights into new restaurants, new television programs, and what is going on in the world of 30-year-olds, a valuable addition to my senior citizen social world. And it’s a lot of fun, too.”

It’s likely that sales of exercise equipment jump in December and January due to New Year’s Resolution Syndrome. Unfortunately, resolutions have a way of running out of steam very fast and a lot of that equipment languishes and gathers dust in bedrooms and garages. Asked how he would get those resolutions to translate into an ongoing lifestyle, Zim responded, “By seeing results,” adding that the most important piece of advice he’d offer a client is “don’t quit. It’s all about being consistent and the results will come.”

Much has been said about the rise in obesity among children, many of whom seem locked into their video games, TVs and telephones. While their thumbs are well-exercised from texting, the same can’t be said for the rest of their bodies. When Zim was asked to comment, his emphatic and immediate response was “the parents are doing a very bad job. I’m a parent of two teenage girls and they’re very active with school, studying and gymnastics. I can’t let a computer baby-sit my kids.”

He shared an anecdote about one of his longtime clients, Donald Mann, 88, who’s “been with me for 20 years. Ten years before starting he had a heart attack. He also had a bad back and the doctor had told him he’d have to live with it. But three months after starting, the back pain went away.”

Describing Mann’s wife, Micky, who is also in her 80s, as “my Marilyn Monroe.” Zim said she’s been exercising since her early years and has been working out in his studio for 18 years. “She can balance on one leg for almost a minute,” he marveled. “Looking at them both, you would never believe their age, and it’s not genetic because they’re not related by blood. It’s from clean living and regularly exercising.”

Asked if one particularly significant memory stood out from his years as a trainer, Zim recalled the time Mann, who was then in his mid 80s, took a bone density test. A year later he took another one, and without medication his bone density had gone up. “I hang my hat on that,” Zim beamed. “I believe exercise is the best way to build up bone density, and that was one of the coolest things!”

Zim is dedicated to the belief that with an ongoing healthy lifestyle incorporating proper nutrition, aerobics and resistance/weight training that’s appropriate for the unique individual you are, you will achieve the best possible physical condition for yourself. As a result, he and A Tighter U have been instrumental in transformations that can best be described as downright ZIMpressive.
.