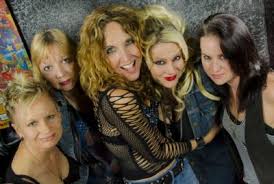 Organizers of the 63rd annual Fiesta La Ballona will provide live music from some of the area’s best bands at no charge to celebrate Culver City’s annual “Party in the Park” August 23-25th. The celebration is held at Veterans Park and produced by the City of Culver City, local sponsors and hundreds of volunteers. Veterans Park is located at 4117 Overland Avenue in Culver City and complimentary parking is available.

Fiesta La Ballona will open Friday, August 23rd at 4:30 p.m. with the Jumpin’ Joz Band performing a combination of swing, jump, jazz and early rhythm and blues. The evening also includes the “Fiesta-Palooza” where four of Culver City’s local teen bands will perform.

On Saturday, August 24th the Mariachi Voces de Mexico will open the day at 12:00 noon with mariachi music followed by Instant Replay playing classic surf hits at 1:45 p.m. Female rocker Jennifer Corday and her all-girl band Kiss Me Deadly (pictured above)  will bring their brand of 80s classic rock to the stage at 3:30 p.m. followed by the social awareness hip-hop band The Bricks at 5:15 p.m. (The Bricks concert is sponsored by Los Angeles County Supervisor Mark Ridley-Thomas.) Saturday night The World’s Grooviest Disco Show, The Funky Hippeez, will be performing a two-hour disco dance party in their most flamboyant 1970s garb starting at 7:00 p.m.

Sunday, August 25th at 11:45 a.m. Ricardo Lemvo and Makina Loca will open the stage with their cool blend of Afro-Cuban rhythms followed by Upstream providing an eclectic blend of reggae and soca music at 1:30 p.m. Lisa Haley & the Zydekats will mix it up for festivalgoers with New Orleans zydeco at 3:15 p.m. Katia Moraes & Pure Samba will close out the day’s live performances Brazilian-style at 5:00 p.m.

The Fiesta is produced by the City of Culver City’s Parks, Recreation and Community Services Department and the Fiesta La Ballona Committee. A variety of local sponsors also help fund and support Fiesta including California Mentor, Sony Pictures Entertainment and many more.

To learn more about Fiesta La Ballona or to sign up to be a volunteer, visit the website at www.fiestalaballona.org and find out more about the Fiesta by liking the event on Facebook, following it on Twitter, or viewing it on YouTube.