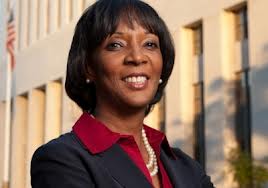 Join the Culver City Chamber of commerce on Thursday, August 15 at 7:30 AM Registration with the Program at 8:00 AM when Los Angeles County District Attorney Jackie Lacey addresses the Chamber.

Jackie Lacey has spent most of her professional life as a prosecutor, manager and executive in the Los Angeles County District Attorney’s Office.

On Dec. 3, 2012, she was sworn in as District Attorney. Ms. Lacey oversees roughly 1,000 lawyers, nearly 300 investigators and about 800 support staff employees. She is the first woman and first African-American to serve as Los Angeles County District Attorney since the office was created in 1850.

A Los Angeles native and graduate of the University of Southern California Law School, Ms. Lacey joined the largest local prosecutorial office in the nation in 1986 as a deputy district attorney. She worked her way through the ranks as a front-line prosecutor.

While serving as a deputy district attorney, she prosecuted hundreds of serious criminal cases. Ms. Lacey won national attention for her successful prosecution of the county’s first race-based hate crime murder. Ms. Lacey was recognized by the U.S. Department of Justice in May 2000 for prosecuting this case and for participating on the Law Enforcement Coordinating Committee.