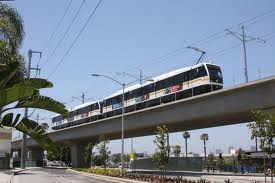 Last Friday July 12, the California Public Utilities Commission (CPUC) tentatively closed the books on one of the last remaining avenues for opponents of the Expo Line in West L.A. to stop construction in its tracks, according to StreetsBlog. CPUC posted a “Proposed Decision” on its second hearing of the rail crossings for Phase II of the Expo Line. The ruling unequivocally states that the 16 at-grade and 11 above-grade crossings fall within state guidelines.

Expo Phase II is an eight mile extension of the Expo Line from its current terminus in Culver City to near the 3rd Street Promenade in Santa Monica.

CPUC is a state board that reviews, among other things, rail projects that impact “public utilities.” In this case the impact would be on the city’s road network. When CPUC reviewed Phase I of the Expo Line, the board found several items for concern and ordered additional safety mitigation at one crossing and the construction of a new station at where the Expo Line crossed Farmdale Street near Dorsey High School. When CPUC unexpectedly re-opened its review of Expo Phase II, despite the fact that the line is already well under construction, rail fans fretted.

However, the Proposed Decision seems to close one of the two remaining battleground for Neighbors For Smart Rail, the coalition of neighborhood groups fighting the line. The remaining battle is at the California State Supreme Court, where they hope justices will rule that using a “future baseline” as the basis for a traffic study is contrary to state environmental laws.

But CPUC’s Proposed Decision hints at a Supreme Court Ruling in Expo’s favor.

While CPUC is not the State Supreme Court, it rejects the argument that Sunnyvale and Madera mean that using a future baseline is automatically against state law.

Our analysis of the relevant case law and CEQA Guidelines do not reveal any impediment to the use of a future baseline. We do not see that the Sunnyvale, Madera, and Communities for a Better Environment decisions conclusively prohibited, in all circumstances, the use of a future baseline to evaluate a project’s environmental impact on traffic and air quality. Similarly, CEQA Guidelines § 15125 (a) states that the beginning of the environmental analysis “will normally constitute the baseline physical conditions by which a lead agency determines whether an impact is significant.” As we discussed, supra, it is telling that the Guidelines used the word “normally” rather than “exclusively,” which indicates that Expo Authority, or any other Lead Agency, can under the appropriate circumstances consider a future date in order to evaluate a project’s environmental impacts.

While we continue to wait for a State Supreme Court ruling, one of the other bodies that can hold up or approve rail projects has given its full stamp of approval to Expo Phase II, even after considering the various legal arguments against the project. Whether that means the Supreme Court will agree is still unknown, but now three legal bodies have given their approval to Expo Phase II, crossings and all.

Thanks to Darrell Clarke for the heads up on the ruling, and thanks to StreetsBlog for the coverage on this important issue.